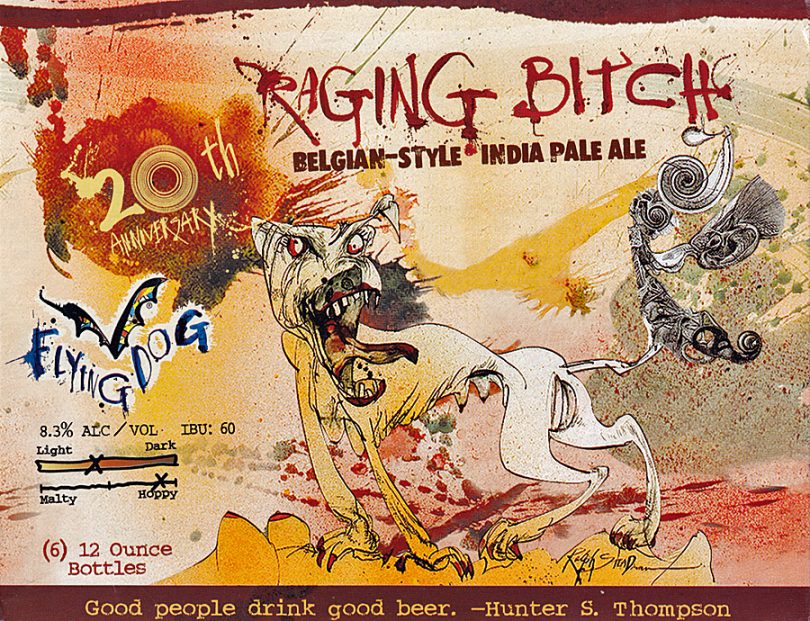 Literally. Six years down the road, Flying Dog Brewery wins a great victory for freedom of speech, crushing that hoary old idea that the First Amendment doesn’t necessary apply to products that make you drunk.

The United States Court of Appeals ruled yesterday that the Michigan Liquor Control Commissioners can be held accountable for violating Flying Dog Brewery’s First Amendment rights related to the 2009 ban of the sale of Raging Bitch Belgian-Style IPA in the state.

“This ruling is invigorating,” Jim Caruso, Flying Dog CEO, said. “It’s taken a few years, but now appointed bureaucrats are accountable for imposing their personal agendas and prejudices on the public, and for committing the crime of violating Flying Dog’s right to Freedom of Speech. This is refreshing, and I hope this Federal Court ruling benefits breweries, wineries and distilleries in other states, as well.”

The Supreme Court had long established that the power to regulate alcohol does not authorize the violation of free speech rights. Yesterday’s landmark ruling confirms again that officials who nonetheless violate First Amendment rights are not immune from liability.

The Commission originally deemed the Raging Bitch label “detrimental to the health, safety or welfare of the general public” and prohibited the beer from being sold in Michigan. Flying Dog found that to be an appalling attempt at state censorship, as well as a clear violation of its First Amendment rights.

The ruling will allow Flying Dog to recover damages from the loss of sales during the ban, which Caruso plans to use to establish a Freedom of Speech society in the brewery’s hometown of Frederick, Md.

That last line is important: the judge not only ruled in favor of Flying Dog, she also stripped away the “pseudo-judicial immunity” the commissioners have been cowering behind. Which means they can be sued for violating Flying Dog’s constitutional rights, which serves the dual purpose of punishing those uptight swine and making future uptight swine with an agenda think twice before callously brushing aside the First Amendment.