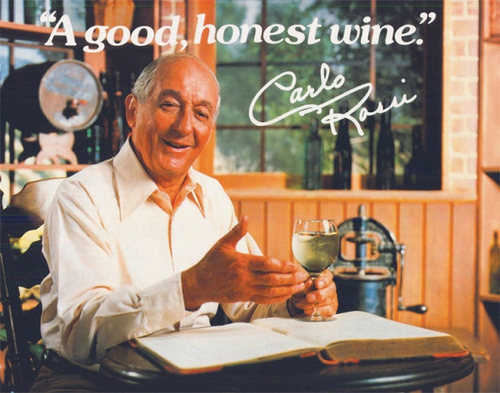 The King of the Jug Wines is Charlie “Carlo” Rossi, who, though he died in 1994, still reigns over the category today. He peddled a pretty good, mostly honest wine for E & J Gallo Winery until his death at age 90. I say “mostly” honest, because he had less to do with making the wine that bears his name than either he or the Gallo company let on.

Charlie started out as a grape shipper during Prohibition, and had the foresight to marry into the Gallo family when Ernest and Julio’s wine empire began to rise. He went to work for Gallo as a salesman. In 1962, according to the unauthorized history of Gallo, Blood & Wine, by Ellen Hawkes, Gallo introduced a cheap wine called “Mountain Red” that became popular because it sold in a big jug with a ring handle for carrying. In the late-60s, the counterculture embraced Mountain Red: a Berkeley, California hippie commune, for example, called themselves “Red Mountain Tribe” after their favorite Gallo product. But Ernest Gallo, not an Age of Aquarius sort, didn’t appreciate the free publicity. He decided that Mountain Red needed a re-branding.

Re-brand as what, though? Shirttail relative Charlie was still on the payroll, now working in the marketing department. He had a fortunate last name in common with the Italian winemakers Martini & Rossi, famed for their sparkling wine and vermouth (although Charlie was no relation). And, as it turned out, the congenial Charlie proved to be good in front of a camera, better even than the actors that Gallo auditioned for the new, yet-unnamed brand. Why not? Charlie started going by the Italian “Carlo,” Mountain Red was retired, and in 1975, 40 years ago this year, “Carlo Rossi Vineyards” was born.

Charlie/Carlo’s main contribution to the brand was as a pitchman, and he was a goofily endearing one. He appeared in all the early TV ads, shirt unbuttoned, chuckling, the antithesis of wine snobbery and pretentiousness. “I like talking about my wine,” he laughed, in what would beome a famous tagline, “but I’d rather drink it!” The good, honest wine (“100% grape wine,” the label assures us) became a good, solid seller, and Carlo’s wine jugs and boxes are still making money for E & J Gallo to this day.

As for how good they really are… the jugs are at least good enough for everyday drinking. I can’t tell much difference between them and Livingston Cellars or the others on the jug shelf. But if the occasion calls for a full 5 liters rather than a mere jug, Carlo’s “Founder’s Blend” boxes are a little more interesting than the jugs, and well worth the modest $20 price. Just don’t be fooled that what you’re drinking comes from an independent vintner, or that it has anything to do with Martini & Rossi.