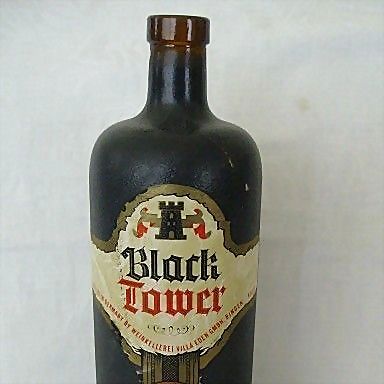 It doesn’t exactly call for a celebration, but a toast wouldn’t be out of line. Black Tower, the cheapo sweet wine imported from Germany, has managed to hang on into its 50th year of providing bargain juice.

The Tower first rose in 1967, and it started out as a mere knockoff. German liebfraumilch — a light and uncomplicated white wine that’s inexpensive to churn out — was the big seller in those days. Blue Nun was the brand leader, moving 35 million bottles a year at its peak. Black Tower was built to take a bite out of that market.

There’s nothing much special about liebfraumilch, but Black Tower stood out from the crowd by selling in a stoneware-like crock that resembled ancient Roman drinking vessels. It did pretty good business through the 70s until the liebfraumilch fad mercifully ended.

You’d think that’d be it for Black Tower, but the brand has shown an amazing talent for re-invention. You can still get the liebfraumilch (now labeled Rivaner) if you want it, in a less-sugary and more tolerable version. Black Tower Fizz, a canned sparkler introduced in 2008, seems to be responsible for launching the strange wine-in-a-can trend. And the Tower’s so-called “premium” range features versions of pinot noir and chardonnay. Germany is not exactly known for its pinot and chardonnay, any more than France is known for its beer; but Tower forged ahead anyway, and the result is at least affordable.

Today Black Tower is Germany’s number one wine export, leaving old rival Blue Nun in the dust. It’s a survivor. It’s (usually) better than you’d expect for $6.99. It may even have picked up a dash of retro street cred after all these years. Not a bad success story.