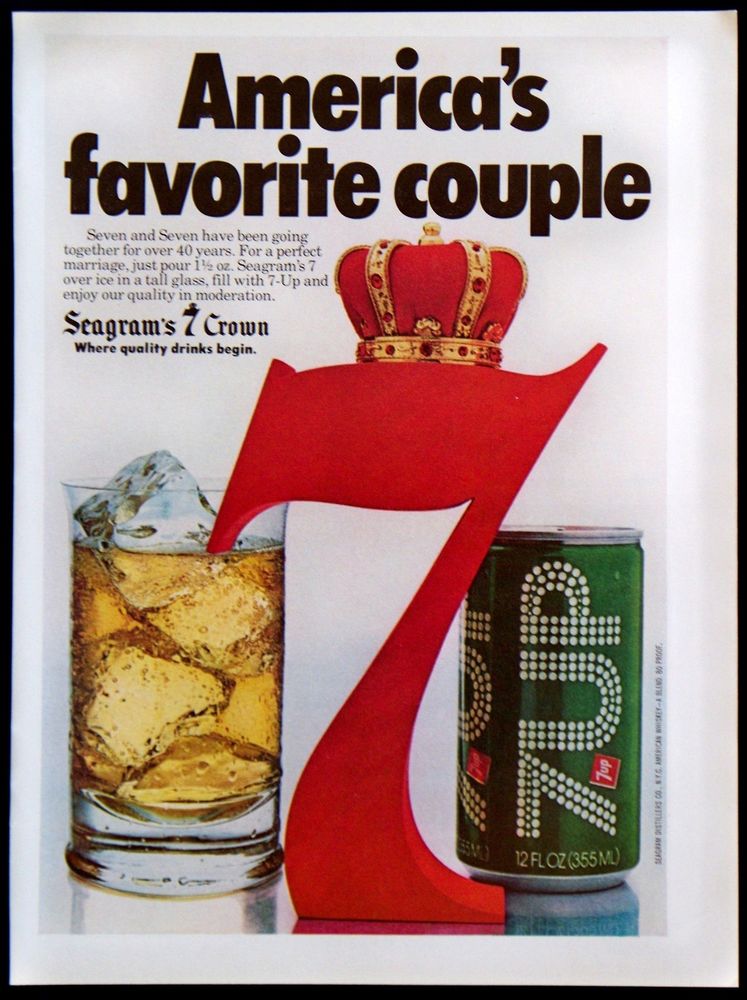 Old friend Seagram’s 7 Crown whiskey is back in the news. This year on July 7th (7/7, get it?) 7 Crown reappeared with its first advertising campaign in over ten years. Teaming with the National Trust for Historic Preservation, Seagram parent company Diageo launched “National Dive Bar Day,” and pronounced 7 Crown “the quintessential dive bar drink.”

In other words, Seagram is pitching 7 Crown as scruffy and cheap. Which, when you think about it, seems like a smart move. Nobody is opposed to supporting dive bars, and 7 Crown has little to lose after nearly fading into oblivion.

Old-timers might remember the days when 7 Crown was king. It took a while to seize the throne. The brand started out in the 1930s, in the days after Prohibition when the Seagram Company wanted to launch a new whiskey blend. The story goes that Seagram CEO Sam Bronfman was given a range of flavors to choose from. The seventh one he tasted was the one he liked best, and so was born 7 Crown. (Another flavor, Seagram’s 5 Crown, was discontinued during WW2.)

When Seagram’s marketing department got the idea to team 7 Crown and 7Up, things really took off. Seagram’s 7 was the first brand to hit 100 million cases sold, according to booze historian and former Seagram employee Arthur Shapiro. In the 1970s, the 7&7 became America’s go-to cocktail, the safe choice that even casual drinkers could enjoy and order with confidence. By 1983 Seagram’s 7 went over the 300 million case mark, and even today it sells enough to hang on among the top 30 spirits brands.

That’s not because of great taste. 7 Crown has always been made with 75% grain neutral spirits, which doesn’t leave much room for actual whiskey. Mixing it with 7Up will at least make it taste like something. It’ll suffice as a shot, but the best thing about it is it’s cheap.

Thus the clever dive bar tie-in. Calling 7 Crown “the quintessential dive bar drink” might be pushing it, but many people will remember the 7&7 as their first taste in some smoky corner bar. Diageo is counting on that nostalgia factor in giving the Crown another go:

“Seagram’s 7 Crown and dive bars go hand in hand, and have for decades, because the two are easy, approachable and share a history of bringing people together,” says Sorley. “Our campaign was born so that consumers 21 and over would feel inspired to gather at their local watering holes, grab a 7&7 or a shot and a beer, and take a moment to appreciate and recognize the simple hidden gems we all know and love.”

For those actually interested in historic preservation, be aware that you can support the National Trust by using the hashtag #savethedivebar on social media, or by purchasing a “Save The Dive Bar” t-shirt — but not by buying a bottle of 7 Crown. All that profit goes straight to Diageo.

For those more interested in a hazy trip down memory lane, you could do worse than guzzling a few 7&7s.