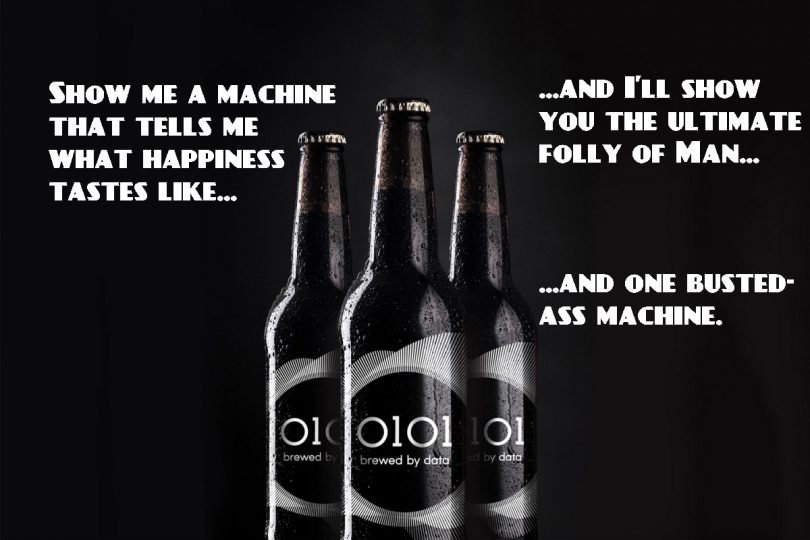 The ground-swell of enthusiasm for micro- and craft-breweries over the past decade has benefited us all in one way or another. Maybe you like fruit-infused lagers or beers made from yeast grown in some dude’s beard or some high-gravity suds served in a taxidermied squirrel. Whatever your psychotic fancy, the rise of small breweries has given us all something to celebrate and celebrate it with. The craft boom is the quintessential American impulse: take an idea (no matter how insane), build a business, and realize a dream–even if that dream is to make beer from all those spare testicles you have lying around. With all of the information available online, even you, humble and likely inebriated reader, could start brewing beer in your own sad little kitchenette. But when anyone with an IQ greater than their shoe-size can become a brewer, some of the wrong people will do just that.

And by the “wrong people,” I mean “marketers.”

I understand that marketing is a fact of the business world and something of a necessary evil, but I am not usually kind to marketers when it comes to alcohol. When a marketing firm decides that it can use “big data” to actually create a beer, I start to shake–and this time out of anger. It is kind of refreshing, actually.

The UK marketing firm Havas Helia (who have worked with Diageo, so you know they’ll shill for anyone who can pay) had an interesting idea: collect data from social media posts about New Year’s Eve 2015 to get a sense of the emotions and sentiments of revelers, and then take that data to create a beer that embodies those feelings. On the surface, that idea is both beautiful and profound–encapsulate the hopefulness and optimism of NYE celebrations in a medium that is almost guaranteed to bring people together and generate good cheer. They even named it 0101 to honor the spirit of January 1st. Or to honor the number 5 in the nerdiest way possible. Adding to the nerd factor is that they used IBM’s supercomputer Watson (as in the same Watson that competed on Jeopardy) to take that data and devise a recipe for a beer that tastes like “joy and optimism.”

The problem is in both the way in which they crafted this brew and in the ultimate message of a machine-made beer. It goes like this:

First: 0101 Beer was born out of opportunism and not out of love.

This is like spawning a kid just to get the Child Tax Credit. Or spawning a kid just to compete with over-seas clothing manufacturers. It was not created by people who love beer so much that they wanted to share that love with others. It is, in essence, soulless despite its attempts to capture a truly human emotional state (more on that later). In it’s simplest form, it is the natural product of the marketer’s impulse: don’t just sell an image, but sell something that tells the customer that the product itself is the perfect instance of what they want to feel conveniently packaged in purchasable form.

If Havas Helia analyzed social media posts about the New Year, how many FaceBook updates and Tweets do you think were written by someone who was already well into his or her cups? Odds are that many (if not most) of the very same sentiments of hope and joy and optimism that Watson analysed were the result of boozes that already exist because that’s what they’re there for. We can always use a new brew, but we don’t need to be told what “joy and optimism” feel like.

Which brings us to…

Third: 0101 Beer tries to sell us a gross perversion of what it means to be human.

I told you it was coming, and here it is–cold, honest, and brutal: as much as the Creature can lift us up to great heights of emotion and drag us through the lowest, darkest parts of our souls, it’s still us who actually feel those layers of human experience. This beer wants to be the drinkable embodiment of some of our greatest feelings, and its creators do not seem to know what those feelings actually mean. They are not something that can come in full form from something on a store shelf. They do not come from something that has a price tag and the option for a receipt.

Joy and optimism come from context, from interactions and introspection and the unknowable recesses of our hearts. They do not come from an ingredients list and the cold reasoning of a computer program. What they are attempting is as close to blasphemy as you can get before having to cite some holy book.

Think back to a moment when you took a drink and everything seemed great and wonderful and the future looked bright and shiny.

For me, one such moment was drinking my first hearty Belgian triple-abbey ale with my drinking mentor and life-long brother-in-Armagnac Wes. Others were with good friends and dirt-cheap brews like Milwaukee’s Best and PBR and Schlitz on warm summer nights when we felt like kings, like nothing was beyond our grasp. We were mighty, unstoppable, filled with vim and vigor and a lust for the conquests of tomorrow. Others were with my grad-school roommate throwing darts and reciting poetry between rounds of Taco Bell and shots of Black Velvet. Most of those were not anything close to “delicious,” but it produced some of the greatest times I can’t quite remember.

Not once did we need to ask ourselves if there was something in a bottle that could teach us what those feelings were. They grew out of our shared joy of the moment, and we’d have gotten there no matter what might have been sitting in the fridge.

I think this is what bothers me most: the idea that a broad collection of joyful statements could be mapped onto an ingredients list and that the resulting brew could be billed as a recreation of them in drinkable form. It misses the point, it ignores the fact that what we drink does not give us our emotions and our hopes–it gives us license to have them in a world that constantly tries to suppress them.

No machine, no algorithm, no form of data science could ever understand this. This is our realm and it is hallowed ground.

Maybe 0101 is tasty. Maybe it is the best damn beer ever. Even if it is, I’d give up any chance of tasting it for another night with the cheapest brew imaginable in the company of my friends and our own latent love of a good time. We know what joy and optimism tastes like, and we can goddamn guarantee that 0101 isn’t it.