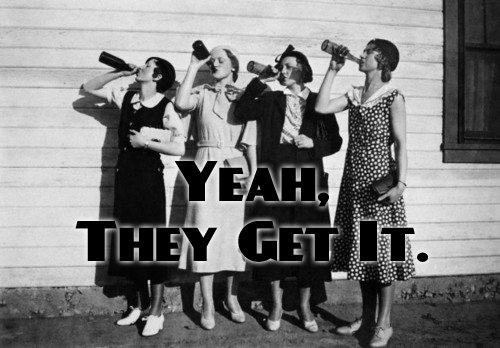 Fellow Hammer Brian is a wise, wise man, and you damn well better be taking his word as gospel. Take this bit of analysis and prophesy from him recently. I’m a fan, and you should be too. Also which you should be? DOES ANYONE KNOW HOW TO SAY THAT PROPERLY?

Anyways, advertising is how the unwashed masses are corrected into making better purchasing decisions, and it is (all joking aside) how companies build awareness and mobilize their products in the broader market. Without corporate advertising, things just don’t get enough traction in the marketplace and the whole of the market flounders as a result. Or so it seems, since I was too busy being hungover in college economics classes to take cohesive lecture notes.

We can all agree, though, that we have a weird relationship with alcohol advertising, right? The common understanding is that you can’t show anyone actually drinking on camera. The famous Neil Patrick Harris commercial for Heineken is a good example–it hangs a lantern on the fact that advertisers can’t show a spokesperson actually drinking, even if that advertiser’s product’s only possible use is to be drunk. So, it’s a government thing, right? The Feds said “No dice” and so that’s that? Actually, the truth is weirder. Sadder? I don’t know–it’s late and adjectives are hard.

So, the FCC (which seems to be the likely culprit) is actually pretty hands-off on the issue of drinking in commercials. The problem is in the private sector–the networks, specifically. PolitiFact wrote a piece investigating this very issue, and the truth seems to be that the Feds are cool with it, but the networks posit themselves the arbiters of what is and what is not acceptable on the air. (It would be crass to list how many terrible things they do allow, but we are a classy folk. Not that classy, though. Not me, at least. Excuse me while I adjust my pocket square and punch a small child.)

So what is so horrible about the state of alcohol advertising? The short answer: more than I care to get into right now. However, there are a few things that I think stem from this issue.

First, if networks are too squeamish to allow alcohol adverts where someone (God forbid) actually drinks the product, then they have to get crafty and sell…bear with me here…not the product but an image associated with that product. See? I paid attention in marketing classes, largely because the hangover cleared after my econ classes. (Actually, I took neither kinds of classes, but ended up in a lot of weird lecture rooms in college because numbers can be hard to read with one bleary eye. And now they’re finally paying off, and you’re reaping the benefits.)

Now that we know that it’s the networks that hate the product but want to push the image, let’s take an honest look at that image, shall we?

This is good work. It’s a clarion call against the absurdity of alcohol advertisements in our mass media. It plays well against the fact that

“Congress has not enacted any law prohibiting broadcast advertising of any kind of alcoholic beverage, and the FCC does not have a rule or policy regulating such advertisements.”

For fuck’s sake–we’re adults watching an advertisement for something that only we can legally buy. Granted, some of us are stone-cold stupid, and therefore might not know what to do with it. Not you folks–you know exactly what needs to be done, and for that I applaud you. But should we have to place our faith in the same people whose sense of judgement is cool with accepting advertisements for committing infidelity while simultaneously abhorring the idea of someone drinking so much as a beer on camera?

It’s just a shame that Heineken had to lead the charge.

Second up: Ray Liotta wants you to drink 1800 tequila.

Right out of the gate, 1800 is owned by the same people that own Jose Cuervo. That’s fine. But if the idea is that alcohol adverts are selling an image, then what are we to glean from that? That 1800 tequila makes you look like Ray Liotta? Sure, he was in Goodfellas, but even the producer thought it was a bad call. At least at first.

Even so, do you want to look like on old catcher’s mitt that’s been cured in horse piss and the unforgiving rays of the Sonoran Desert sun? Seriously, take a look at his IMDB page. Sure, he’s been working, but how many of the past 30 titles (excluding those in post-production) that have actually aired have you seen? Is that what 1800 does to you? Confines you to a sad kind of disgraceful working obscurity? And appearing on episodes of Hanna Montana?

Just show Mr. Liotta drinking the damn stuff and be done with it. The subtext isn’t working for you. And he deserves better.

Third up: Keifer Sutherland wants you to drink Cuervo.

The tagline on the ads is “Have a Story”–as in “drink Cuervo, do some crazy shit, tell everyone about it tomorrow.” So let’s think about what Agent Jack Bauer gets up to in that commercial: there’s some fun bus ridin’, some domestic disputin’, some questionable tattoo gettin’, some artistic horticulturin’, some possible group sexin’, and some pansy-ing out of a legitimately sweet fight club scenario-in’. The lesson: “Just don’t have any regrets.”

So nothing about the tequila, like how it’s made from almost half sugar. The message is clear: Cuervo lets you make questionable calls that all turn out just fine. You and I both know this: that commercial, were it selling the true image of what it means to drink that mixto BS, ought to have ended with agent Bauer wrapped around a toilet with a series of non-consensual Sharpie artwork covering that halfway-to-Ray-Liotta face of his.

Holy shit–there’s a pattern here. They’re telling us something. Something dark.

Fourth up: Bud Light wants you to indulge your inner child. Or trip on mescalin.

AB In-Bev has been making a big media push lately, which should tell you one of two things: either they’ve got more money than sense, or they’re hurting in their share of the market. Remember when they kind-of-sort-of-whoops-our-bad suggested that Bud Light was a great shortcut to . . . let’s just say “non-consensual sex”? Well, they also want you to remember Pac Man, for some reason.

Even though those “Up For Whatever” ads start in bars, you won’t see anyone actually drinking Bud. What you will see is entirely unrelated and generally confusing. We ought to call them out for what they are: “whatever” is not an optimistic declaration of good spirits and an adventure-seeking mindset–it’s more often a disinterested, defeated acquiescence to any option that is presented because, goddamn, the night is bad enough that you’re drinking Bud Light, so anything at all is better than the turgid slump in which you live. Saying “yeah, I’m up for whatever” is the somber response you give to friends who are trying to get you off of the couch, put pants on for the first time this week, and finally see the light of day. It applies equally well to an offer to scale the Seven Summits as it does to getting punched right in the crotch just for the chance to feel something again.

Bud Light is kind of like that, though–there’s some promise at first, but you’re usually left with a bruise or two and your nether-bits are left worse off than if you just said no in the first place.

What have we learned?

Honestly, nothing. We know that the ads we see are full of it, and we’ve become conditioned to largely ignore them. We love our booze, and for good reason. It’s offensive that corporations with massive media budgets take their marching orders from networks that are opposed to showing their products as they are intended to be used. We’re a goddamn nation of drinkers who don’t want to fed a line of bullshit just to boost the bottom line of some bottom-shelf swill at the expense of our good sense. For an industry legally restricted to adults, the networks sure do want to treat us like children. Angry, liver-compromised children, but like children nonetheless.

Like I’ve said before, there are better tipples to be had, and they aren’t burdened by the shame of having to bow to national advertising outlets. That is our homefront, our stronghold, our Helm’s Deep, if you will. And the more we throw our crumpled, sweaty dollars towards other boozes, the more power we deny to those media morons. They’re committed a sin: they’ve underestimated both our numbers and our wiliness. We’re Wild Cards, and that makes us mighty.