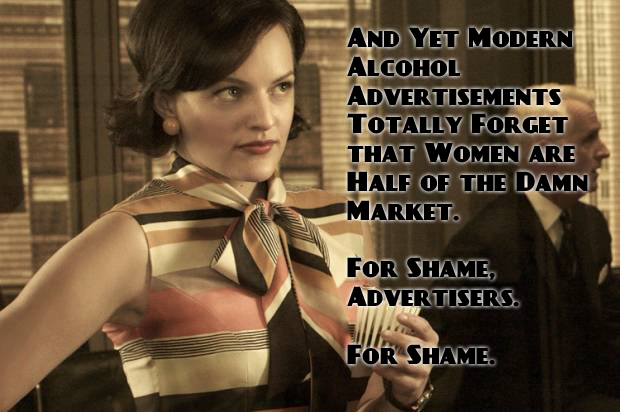 Apparently Mad Men ended this past Sunday, or something like that. All I know is that it showed some good ol’fashioned office drinking, and eventually showed some good ol’fashioned office drinking done by ladies, so that seems like something we Hammers should comment on. After all, women are like, everywhere, and surely some of them like to drink. Also, ever notice how advertisements kind of forget that fact and just use them as sex objects to try to sell swill to us menfolk?

Since we’re on the topic (because I said we were), here’s the perfect cocktail to enjoy with the rest of this article:

The…I don’t know…Executive?We Live and We Learn, Unless We’re in Advertising

1.5 oz. Forty Creek blended Canadian Whisky (or The Knot, or any whisky/whiskey you like)

.75 oz raspberry brandy, or syrup if you’re too timid for a real drink

First, a confession: I’ve been working on a sound legal defense that lets us invoke a right to trial by combat as our defense against drinking-related criminal charges for purely academic reasons. Especially for academic reasons, if anyone asks what I’ve been doing for the past week. However, this little bit of Minority Report-level insanity came to my attention about gender-recognizing beer adverts in Germany that target only women. And terribly, at that.

The image below was pulled from the linked article above, and I want you to take a moment to really put yourself in the following situation: you’re a lady walking down a sidewalk when you pause in front of a sign board to casually check your phone to see if you missed a call or if you got a message from your friends about where they want to meet up for a drink. You’re feeling good and looking forward to enjoying a night out with your closest cohorts, only to look up to see that the sign has changed and this is what’s staring you down:

After the initial shock that you’re eye-to-electronic-eye with the visage of a spangly-jacketed sex offender who looks skilled in the arts of making lampshades out of people, you remember that you’re German (just bear with me on this, we’re in Imagination Land, after all), so you notice that the text above reads “Finally, an Astra advertisement that appeals to women” (note: my German is a little rusty, but that seems close enough). Leave it to ze Zhermans to not use an exclamation point when one would be expected. The text at the bottom reads something like “Astra. What do you have against it?”  Maybe “Astra. Why not?” Either way, a few answers come to mind.

Spangly-jacketed answers. Tell someone where you are right now answers.

It occurs to you that “appeals” is being used rather literally, since this particular ad will not “appeal” to men:

Alright, let’s end that little trip to Imagination Land. That was terrifying, and I never want to visit imagination land again after that. Not in the least because there is no way that ad appeals to anyone but fans of cheap beer who also have overflow plans for when the bodies finally crowd out the crawl space under their back porch.

So the German beer brand Astra is using gender-recognition technology to identify when a woman is in front of their ad space and then present them with what can only be generously called “a pants-shittingly terrifying admonishment from a probable Amber Alert frequently-featured-license-plate-holder.” Someone was paid to come up with that idea, and other people were paid to sign off on it, all of them presumably saying “Yeah, that’s what women want to see” (or whatever the German for that is).

Now, normally one could write this off as just a silly blunder, but if you’re like me, you’re not just one–you’re a drinker, and as such, you are large; you contain multitudes. Some of those multitudinous selves are bound to be pissed.

The reason to be pissed? Ads like these not only are too weird to make any sense, they flat-out alienate women. Women have always gotten a bum rap when it comes to alcohol advertisements in general, since they rarely seem to get a role that is anything anything other than being a sex object to stimulate the baser instincts of menfolk in service of driving the sales of cheap, mass-produced swill. Beer ads are notorious for this tactic. The slew of TV ads for Coors Light, Bud Light . . . any of the Lights, really, come to mind.

You may not personally find a problem with this, but let’s think of it this way: alcohol is the great equalizer. With few exceptions (the odd Mormon or Muslim friend that you tell people you totally have notwithstanding), everyone likes to drink to some extent. Women constitute slightly less than half of the global population by some estimates, but a rough 50/50 split seems to be about right. (However, fellas, if you want statistics in your favor, you might want to move to Latvia, Estonia, Ukraine, or Lithuania. Just don’t make us all look bad.) Despite that, alcohol ads give short shrift to women, and that shit has to stop.

Here are a few quick examples of how to do it right–note, these were launched by the now Bacardi-owned Dewars and ran in print in the 1970s (or thereabouts):

That’s an ad that has the audacity to feature both a woman as an accomplished professional and math. And it prioritizes the last book she read before the plug for the full brand name. The friggin’ gall of those ad folk. The glorious gall.

How about this one from Jezebel, about Slash (as in that Slash)’s mother:

If you want to see more of these, search for “Dewar’s Profiles.” It was a series of ads they ran decades ago that took a reasonable, honorable, and just plain smart approach to reaching the entirety of their potential audience: profile people who did amazing things, give us a sense of who they are, and then put a dude in a kilt in there to get us to buy some cheap blended Scotch. Some were women, some were men.

The message was desexualized and was as admirable as the ads were revolutionary: these people did great things and still loved to drink. Yeah, women are doing some awesome things, and–GASP–those women also like some Scotch. Even today, I like to read those ads as a kind of pre-Internet system of linking together the great tribe of Drinkers, getting to know a little bit about someone with an impressive background who also has a fondness for the Creature. Not that I like Dewars–I prefer the White Horse (since it’s built on a foundation of Lagavulin, conveniently forgetting that’s it’s owned by Diageo).

And yet, even the reasonable and inclusive-minded folks at Dewars have forgotten the good ideas they used to have. I present you with these two fine examples of how not to advertise to women–both, sadly, from Dewars:

First, there’s the whole fiasco over Dewars’ pulled “the Baron” series of adverts from back in 2013. It was a ham-fisted attempt at copying the viral success of Dos Equis’ “the Most Interesting Man in the World” idea, and it failed miserably. It ignored a full half of the market in the interest of pandering to men. As a man (at least biologically), I can say that I’d much prefer to see advertisements in service of the whole of the tribe. We have seen enough ads that just put booze near some women in order to say “See? There’s our product! There’s some women! Don’t you think you should buy our product to get some women?” As a reply, I say “No. I want to buy some booze. If I wanted to ‘buy’ my way to women, I’d have some bigger issues to consider.”

We’re drinkers, and we have principles. Don’t try to confuse us with slick ads to redirect our impulses. That’s just mean.

Second, there’s the sad turn-around of the Dewars marketing strategy: forget advertising to women–just make them sexy additions again! For fuck’s sake–why ignore half of our noble ranks? I am, like I assume most men will be, torn by this. On the one hand, they made a good choice in terms of casting. On the other hand, I don’t want to encourage more millennial bros to get on the Scotch bandwagon just because a sexy woman with a not-from-around-here accent is promoting an inferior blend. All are welcome in the tribe, but I’ll still fight them after a few drinks if I think they’re being an ass. That’s a tradition amongst our ranks. It’s a lot like being welcomed into the Crips or the Bloods. The Latin Kings won’t get back to me (and I don’t blame them, after that last incident…sorry Torro, but you were practically asking for it) so we may never know. But the point stands.

In short, and not considering other feelings or agendas, the current trend of treating women like accessories to drinking instead of worthy imbibers does a disservice to us all. Some of the best drinking companions I’ve ever known have been women, and they deserve to be pandered to as well. Advertising is a racket, so why do we allow an advertising culture that largely ignores them? That seems like bad business, and frankly I could use a few more people to feel comfortable in joining me in a drink. It would make things look better to the judge, at least.