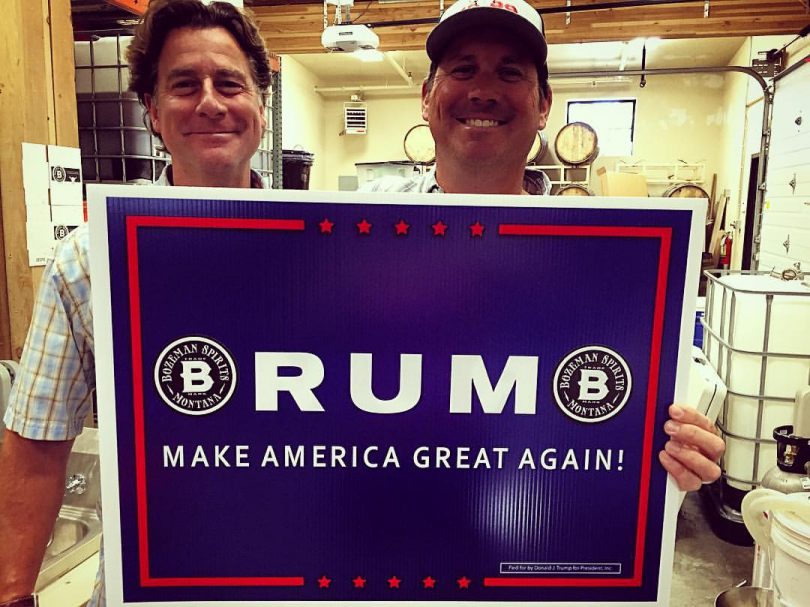 Today is the day, my friends: our quadrennial nation-wide drink-fest that hangs on the delicate lattice of poll results and the hackneyed interpretations of political pundits about who is going to be the new head-honcho of ‘Murica. It is time again for elections, that sacrosanct right and sacred duty of all Americans to find an excuse to be late for work in order to vote for our next President. However, this has proven to be no average election cycle, partly due to the candidates at the top of the ballot and partly due to the end of an historic Presidency.

How historic, you ask rhetorically? As you well know, President Obama brought a monumental first to the Oval Office: he was our first Commander in Chief on record to have beer made directly on White House grounds. Today, that legacy is threatened by the prospect of a teetotaler who has a history of failing as a booze baron ascending to the office who has vowed to undo as much of his predecessor’s accomplishments as possible. It stands to reason that the White House’s home-brew operation–a patriotic symbol of fermented freedom–must be somewhere on that list.

Lest you think that this is a partisan plea to stop you from voting for Trump, allow me to explain: I am not openly advocating for any candidate and hold no affiliation to any party but the Party Writ Large. I truly do not care who you are voting for, or even if you are voting at all. I stand for the right of all of us to do as we see fit and to find our swerve–whether that’s through political action, interpretive dance, or Schlitz binges–however we damn well please and however ill-advised. Hell, right now I’m drinking a mix of Scotch and Va Piano syrah.

It is not good. But goddamn it, it’s mine.

With a little digging, it seems like Trump claims to own “the biggest winery on the East Coast.” The only problem is that it is not, by standard measures of case production, the largest on the East Coast. The also only other problem is that he does not own it (an LLC bearing his son Eric’s name does). Or control it (still Eric’s company). Or apparently know where it even is.

What is more, reviews of the wines themselves have been. . . well, hilarious. Take a look at these reviews from VinePair, like their review of the viognier:

VP: I actively dislike this wine. You know when you walk through the department store and they’re spraying perfume and you accidentally walk through it?

Victoria: Pungent. Like cheap perfume. I actually love the sparkling now, compared to this.

VP: I’m terrified about these reds.

Victoria: This could actually be much more offensive. There’s not a ton of new oak, there’s not crazy high alcohol. The nose is true to the varieties—you get those black fruits and red fruits. It’s not great, nor is it terrible.

VP: I would probably think this was just cheap Bordeaux if someone blinded me on this.

Victoria: It tastes super cheap. But, it’s correct. It’s also just really boring. Like painfully boring. It’s really hard to make wine in Virginia because of the humidity. So the fact that it works at all, is something noteworthy.

So Trump Vodka was a dismal failure, and Trump Winery (which he has no actual involvement in, despite his claims) seems to produce either immediately objectionable or just passably drinkable wines. It is automatically suspicious when someone tries to push a product on you when they themselves have no understanding or experience of it. Even Ludacris had a hand in blending Conjure, the cognac brand the he co-owns. You have to give it to Luda–he knows his hooch and still doesn’t plaster his name all over it. Way to go, Luda.

The reasonable fear to draw from these facts is that not only might Trump shut down the White House brewing operation, but he almost certainly would support the on-going war-of-attrition on small brewers and small vineyards by the likes of mega-corporations like AB-InBev/SAB-Miller and Constellation Brands respectively.

If voting is your thing and you haven’t figured out where to go yet, find your polling place, you shabby bastard. And for after the ballot box, find happy hour specials nearby because you’ve earned it.

Whatever you decide to do this Election Day, do it in good cheer and high spirits. The Creature is a force for good and understanding and kinship. Now is not the time to stoke partisan divides with anger, no matter the outcome of the election.

It is in that spirit that I want to thank the brilliant souls at Bozeman Spirits Distillery for taking a simple partisan campaign sign and turning it into a message that can bring us all together: RUM–Make America Great Again!

Author’s note: the opinions in this article do not necessarily reflect those of Bozeman Spirits Distillery nor do they assume any endorsement from the distillery or its owners. But they make some mighty fine spirits, and they are great people all-around. Send them some love, drink their booze, feel good about both of those things.