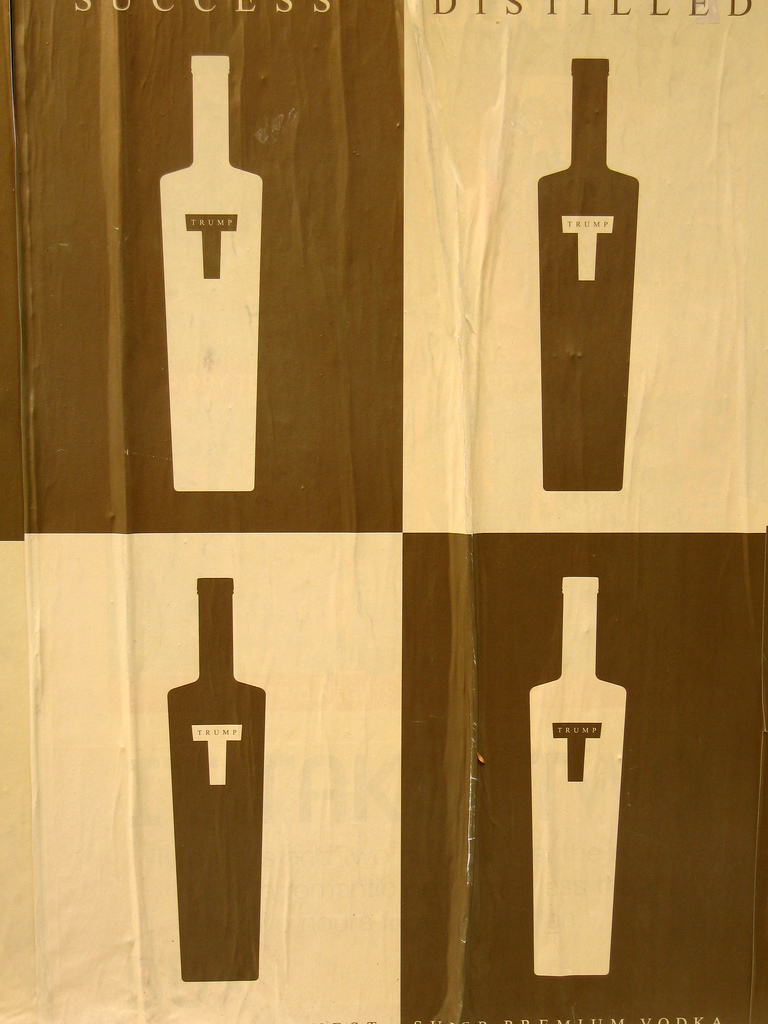 Why would a teetotaler go into business selling vodka? Why would a man point to the death of his alcoholic older brother as a cautionary tale, then turn around and peddle liquor to others? Such are the mysteries of Donald Trump and his short-lived venture into the booze business, Trump Vodka.

As a hoochstorian, Trump’s current political rise reminds me of one of the mighty tycoon’s more dismal failures. Trump poured money into a lot of eccentric projects over the years (maybe you remember Trump Steaks, Trump Magazine, or Trump the Game) but none weirder than his bizarre bid to become a booze baron.

Trump Vodka was officially unveiled at a launch party at Les Deux nightclub in Hollywood in January, 2007. The Donald himself, standing on a red carpet behind a velvet rope, displayed the bottle: It was shaped to resemble a skyscraper, with a gold-encrusted letter T on all its four sides, and emblazoned with the slogan “Success Distilled.” Advertising billed it as “the World’s Finest Super Premium Vodka,” and insisted that it would “demand the same respect and inspire the same awe as the international legacy and brand of Donald Trump himself.”

So, what moved Trump to suddenly jump into the vodka business? “A great friend of mine was a founder of Grey Goose,” Trump told interviewer Larry King, “and what we’re going to do is to top it. I want to top them just because it’s fun to top my friends.” Trump further predicted that the “T&T” (Trump and Tonic) would soon become the most requested alcoholic drink in America.

As for the vodka itself, it was created by Wanders Distillery in Holland, distilled five times from “select European wheat,” and then rested for six months in stainlees steel vats before botttling at 80 proof. Vodka fans gave it mostly positive reviews when it debuted, although many also noted the steep price tag, $33 and up.

The only trouble was, nobody bought it. By the end of 2007 it barely registered among the top-selling vodkas, badly trailing the likes of Smirnoff and no threat whatsoever to Grey Goose. Go figure that customers wouldn’t line up for a product that existed for the sole purpose of one-upping Trump’s friend. Who would have guessed that drinkers wouldn’t hand their money to a teetotaler who had no idea what his own product tasted like. In 2008, less than two years after launch, the Trump Vodka trademark was abandoned.

Trump Vodka went out of public circulation altogether in 2011 (although vodka of some kind is reportedly still sold under the Trump label at certain Trump-owned hotels). Its last known public sighting was in Israel, where a local distributor peddled it without Trump’s authorization, and the tycoon successfully sued to stop him. In the sorry saga of Trump Vodka, it seems appropriate that the last people on earth who actually wanted to buy the stuff were prevented from doing so by… Donald Trump.

Unloved in life and unlamented at death, Trump Vodka was a half-baked idea to begin with, and ended not with a bang but with an un-Trump-like whimper. Whoever thought it up ougtta be fired.