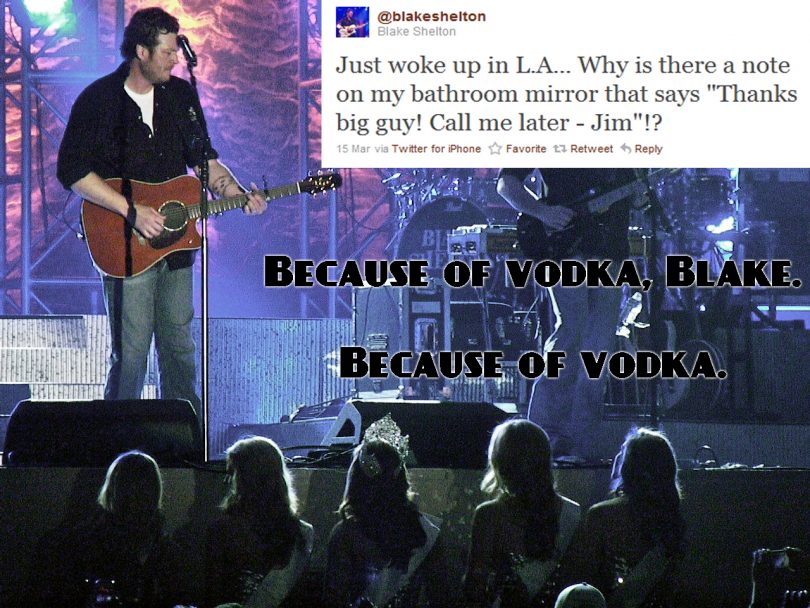 Blake Shelton vodka: a phrase I never thought I’d have to write, but here we are.

Let’s be honest–we’ve all woken up after a night of drinking with either an unexplained note from some guy named Jim, or a bruise on an improbable part of our nethers that looks like the map of a Latin American country, or a series of voicemails from more than one “Sergei” who wants his/their money and he/they want it NOW. When your morning starts off that bleak and wonderful, only a few thoughts come to mind:

None of these questions are easy or comfortable to answer, but the answers usually trace back to one thing: vodka–the co-conspirator-turned-instigator that quietly lights the fuse of your gun-powder cache of crazy. Vodka has always been that secret saboteur of your nights out, the rogue agent that takes all of your best intentions and turns them into lost hours and longer police records, the cheap snake oil that cures you of your better judgement and grants you the power to give so few fucks that it becomes mathematically interesting.

A few things account for that: first, vodka is usually one of the cheapest well spirits at bars and is unrivaled at the liquor store for their octane/cost ratio. There is a very good reason for that, and it has to do with the nature of distillation:

Vodka is the easiest and cheapest hooch you could possibly make.

In short, vodka is just a clear, unaged spirit. You can make it from any kind of grain (which is how most vodkas are made), potatoes (which is less common than you might think), or anything else that will ferment. So, anything that contains some form of sugar that yeast can process. This isn’t rocket surgery, and that is why people with more money than sense (like 50 Cent and Donald Trump) can claim to have their own line of vodkas. And now the world gets one more celebrity-backed–and therefore over-priced–neutral grain spirit on our store shelves.

[As an aside, here is a decent article about what differentiates a vodka from an unaged whiskey–a question that probably never plagued you, but it is good information to have for the next time your insufferable hipster friend starts going on about how “in to” moonshine he is because vodka is passe, or whatever.]

Frankly, a Blake Shelton vodka is a non-issue for two reasons: first, even if it does take off, it is by no means a game-changer in the vodka world and will likely be ignored by the majority of the boozing public; and second, he is so late to the vodka game that it is unlikely that anyone will take much notice. I will applaud Blake for being an unabashed drinker–even back in an interview back in 2011 he admitted to loving him some booze. That’s a history and a reputation he’s built for himself, and he hasn’t backed away from it. I admire that quality, even if his music sounds like a tongue-in-cheek parody of terrible country music even when it’s trying to be serious. So he isn’t just jumping on the vodka bandwagon to make a buck (like The Donald did, despite being a professed teetotaler. Bonus round: Wikipedia has a pretty extensive list of similar buzzkills, which may come in handy some day.) However, I cannot help but feel like his fame and his celebrity leverage could be better put to something more deserving and more authentic–like a rye whiskey from a struggling start-up, or a good-ol’-boy kind of southern amber. Basically anything that might be a welcome and arguably more needed addition to the hooch market than just another soulless neutral spirit devoid of any charm or character, just another ghost to be masked in a screwdriver or twisted beyond recognition in a Red Bull. For a man so wonderfully unashamed about drinking, vodka seems like a hollow and passionless endorsement.

Maybe I’m wrong, though. Maybe it is world-shatteringly good. Maybe (hint) if Blake (hint) sends me some (just take the damn hint, Blake) I’ll change my tune. That’s doubtful on all counts, though. Until that unlikely series of events, here’s a toast to Mr. Shelton and his championing of the joys of dancing with the Creature. Cheers, and long may you drink.