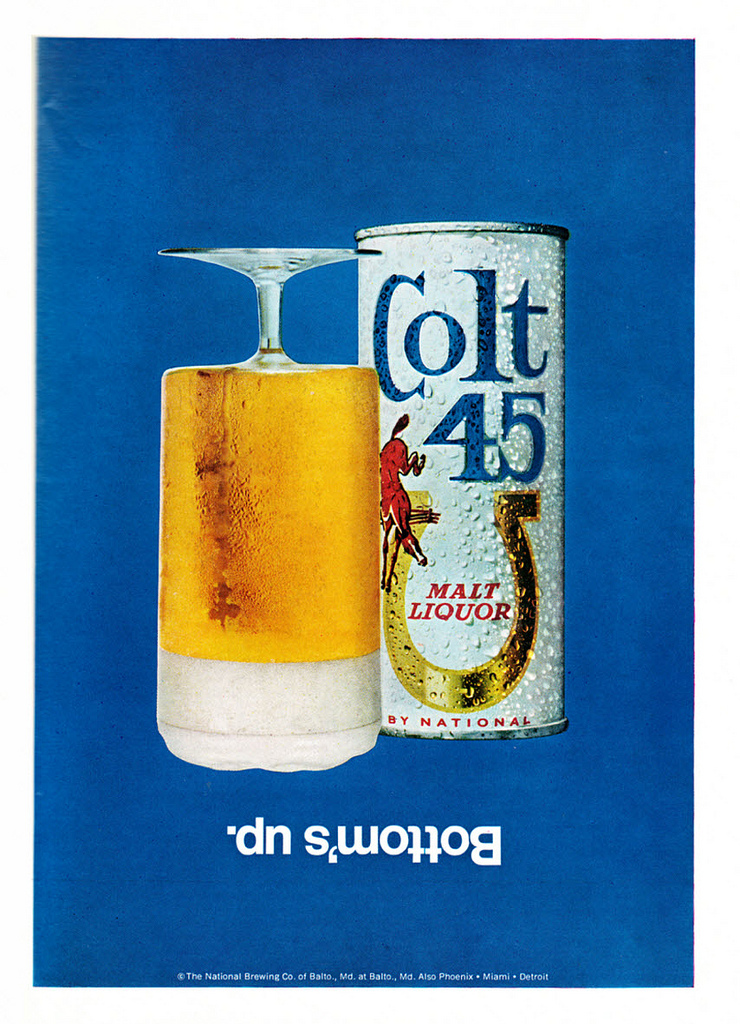 No one would ever call malt liquor classy. Maybe the brand that came closest was Colt 45 back in the 1980s, when it was endorsed by smooth-talking, tuxedo-wearing Billy Dee Williams, Lando Calrissian himself. “It works every time,” Billy Dee assured us in ads that ran back in his Star Wars heyday. Can he pull it off again? That’s what Colt is hoping in bringing back the 78-year-old actor for one more round as the brand’s pitchman in 2016.

Colt 45 arrived on the scene in 1963, a product of the National Brewing Co. of Baltimore, Maryland. The official line is that it was named in honor of Baltimore Colts running back Jerry Hill, who wore uniform #45. But the kicking colt pictured on the can also let buyers know that this was a brew with some kick to it.

Sales of Colt 45 were nothing special through the 1960s, despite some creative efforts. Colt is, I believe, the first beer company ever to try so support its brand with a tie-in board game: Bottoms Up, “the adult game for game adults”: Malt liquor in general didn’t really take off until the 1980s, when rappers started name-dropping their favorite brands. Eazy-E of N.W.A. may have been the first with “8-Ball,” his tribute to Olde English 800. Colt has had its share of hip-hop pitchmen (Snoop Dogg being the most recent) but in 1986 went with Mr. Suave, Billy Dee Williams. Once the booze of last resort of the destitute, Billy Dee lent Colt 45 a touch of class.  It was a good match.

But does Calrissian drink Colt 45? Williams said that he does.

“Yep, Lando drinks it and would say ‘may the Colt be with you,” he told CNNMoney via email. “I enjoyed it back in the ’70s and I’m happy to be drinking it now.”

The ads came in for a lot of criticism at the time from nannies of various stripes. The “works every time” tagline was taken by some as suggesting that high-ABV Colt was a good way to get women drunk enough to consent to sex. Others complained that the ads targeted low-income minorities. Williams brushed off these criticisms but in 1991 moved on from Colt after five years as the face of the product. The hip-hop world moved onward and upward from malt liquor to champagne and cognac. Colt 45 found itself back about where it started, as the street liquor you drink out of a brown paper bag.

Today Colt 45 lags behind the rest of the malt liquor field, hence the desperation play of bringing back Willams after a quarter-century. It looks to be a tough sell. Colt hasn’t gotten any better-tasting in the past 25 years. At 5.6 ABV, its alcohol content is still lower than rivals Olde English and St. Ides. About all it has going for it is nostalgia. We’ll see if Billy Dee has enough magic left in him to drag Colt 45 back up from the gutter once again.