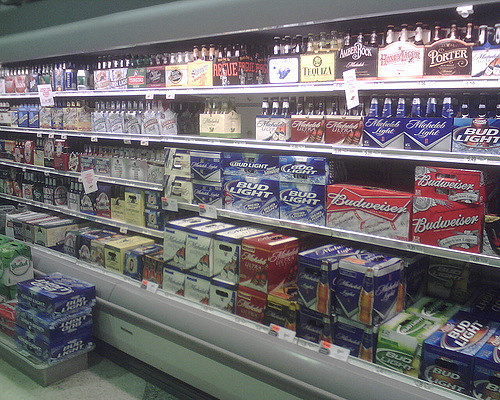 It was inevitable: Walmart, which last year rolled out its very own “craft” beer, is being sued. The class action suit filed last week claims that Walmart’s beer, produced “in collaboration” with an outfit called Trouble Brewing, isn’t really craft. Buyers were deceived into thinking otherwise and paying more for the stuff.

Trouble Brewing offers four brands with cutesy names like Cat’s Away IPA. But the trouble with Trouble Brewing is that it doesn’t even exist. Extensive digging by a reporter for The Washington Post revealed that there is no American brewery by that name:

The applicant listed on filings for the four beers with the Treasury Department’s Alcohol and Tobacco Tax and Trade Bureau (TTB) is “Winery Exchange, Inc.,” now known as WX Brands, which “develops exclusive brands of wine, beer and spirits for retailers around the world,” according to its website. The brewery address given on the TTB documents is Genesee Brewing’s business office.

Genesee is not a craft brewer by any definition (Genny Cream, anyone?) and in fact is owned by a company headquartered in Costa Rica. Nothing on the Trouble Brewing packaging suggests a connection with Genesee or Walmart. An uninformed buyer could well believe, at first glance, that Trouble Brewing is the latest in the flood of small and independent craft brewers to pop up.

Whether that entitles the plaintiffs to legal damages, I’ll leave to the courts. I would only note that when it comes to the booming business of craft beer, where there are fortunes to be made, let the buyer beware. And don’t expect to find any hidden gems in the beer aisle of Walmart.