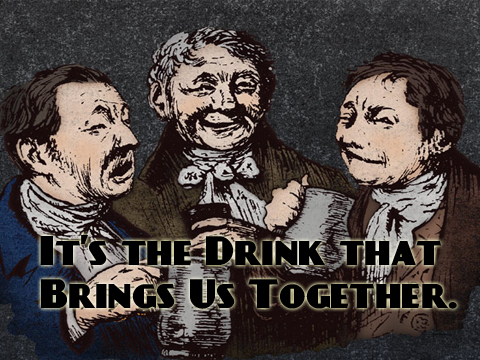 It’s St. Paddy’s Day, and there is no better time for two things: first, ruminating on how we (at least here in the States) both embrace boozing and abhor it at the same time; and second, what makes drinking so goddamn magical. This is about the latter, and it comes from a trusted friend and Hammer-at-Heart Eamonn Schimon.

Culturally, we Colonials embrace the holiday as an excuse for going out and getting blitzed, which is telling because we treat inebriation as though it needs an excuse, as though a “special occasion” is needed before we can just step up and admit that what we need is to go out with our friends or our countrymen and -women and let loose for a few hours. Sure, some of us will end up in the drunk tank, others still will be wading through the turgid depths of a body-crushing hangover tomorrow. But today of all days brings to the forefront the question of why we compete in the game of Drink. And as such, I’m pleased to bring you the well-reasoned thoughts of a fine and dapper drinker I’ve known for a while now to help shed some light on the complicated and chiasmatic nature of our personal love of the human bonding experience of booze and the hard line that we have to walk between being a true Drunkard and just plain being some dude named Chad wearing cargo shorts and doing Jaeger Bombs before last call like they’re going out of style (which, sorry Chad, they never really were.)

So join me in celebrating the first ever BH guest post from a damn fine drinker and a damn fine man, Eamonn Schimon.

Being a drinker, and I mean a real drinker, one is always haunted by a certain question: When will you stop drinking?

Well, not all who enjoy drink ever really encounter this question. Some people are college weekend warriors, and then they meet the girl from college, or if they are lamer, high school, and there are a dozen stories of drinking that build a certain fortress of drunkenness (or masculinity). And sometimes they drink hard after that, depending on where they go–professional schools drink a lot, Christ knows graduate schools drinks harder than that. And sometimes you find yourself in good practice – a heard drinker – no more six-packs on the floor but a bonafide drunk, you keep up with anyone and you’re able to make friends in whatever dive-bar you find. Well here is the place, this is the moment, you can choose: are you a drunk or not? And what does being a drunk mean, what are the hermenuatics of being an alcoholic?

The problem is if you make apologies for that twelve-step thing: if you’re acknowledging that they know you better than you’re willing to admit, they’ve just you turned inside out. And they say, in their program, you only quit if you want to, which means there is a Christ-worthy group of fuckers who are just not willing to give up. And let’s not romanticize it (though it is easy to do that)–drinking is fucking good. It’s fucking fun. It erases mistakes and horrors and it multiplies joy. Romanticizing booze is problematic. Let’s not pretend otherwise. It’s horrible for a lot of people, raped wives, beaten children. Don’t sign up with the pot legalization bunch (though I politically agree with that). Booze is hard. It’s dangerous. It’s tough. Booze is the thing that sometimes makes you feel like a king and sometimes you end up naked face-down in a pile of trash.

It can be an addiction, right? It’s cute to say it isn’t, but clearly it is. So what then? Sometimes you go through that horror mark and sometimes you don’t. You know when drinking is at its best? Human communication, that’s why we do it. We drink to understand other people, to share that shit we never could when we were sober. And, as James Carville said, after three martinis you feel like you could control the world. That fuzz when you’re getting up to take the piss, that vibration in your head, you feel like a god. I’m not saying you shouldn’t. If you’re at all familiar with that ol’ 12-Step thing (and if you’re a drunk, at least a true drunk, you’ve checked off that list…..) you get what it means.

It’s not a fucking pumpkin patch. Some people do it forever and can never do it again – that’s ok. It’s an adventure, sometimes you end up in bad places. It’s not for the faint of heart. There are certain people in life: There are people who never drink: Mormons, Muslims. I don’t get that. And there are people who drink, but it’s a few sometimes here or there, but they stop, and I don’t really get that. So there are two left over, let’s not pretend we’re not aware of that ambivalence: Some who drink and love it and some who loved it and stopped. Chiasmatic logic is rhetorically true for a reason.

I’m a drunk, so I love those moments, some of these moments, so here they are: being with a good friend (they better be sort of a drunk) and sharing stuff you can’t normally (there are reasons why the Eucharist involves wine). Being by yourself and letting the miracle of chemistry work through you: sometimes that’s at a bar (TVs are made for this) sometimes this is at home (and that’s even better). And sometimes you’re a big fucking drunken mess. My only point is that you don’t encounter Dionysius with an empty heart, sometimes you fuck it up and make an ass out of yourself. As Bukowski would have said (paraphrasing) “anyone would do it.” Well you’re not anyone – you’re a piece of shit. And maybe that’s alright.

Thanks again to Eamonn. Some damn fine words.