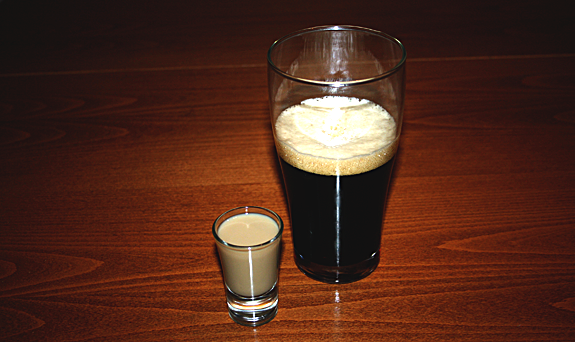 It’s Ireland somewhere, and it’s never too early to start practicing for St. Patrick’s Day. One drink you may or may not want to toast the day with, depending on the company you keep, is the original “bomb” shot, the Irish Carbomb.

It was an American who invented the Irish Carbomb: a bartender named Charles Oat, employed at Wilson’s Saloon in Norwich, Connecticut in the 1970s. According to Oat’s own telling, on St. Paddy’s Day 1977 he was downing cocktails of Kahlua and Baileys with Guinness chasers, and got the idea to spice the mixture up with a shot of Jameson. The drink bubbled up like an explosion, and Oat indelicately dubbed his new cocktail the IRA. Later he started adding the whole mix, including the shot glass full of Jameson, to half-finished pints of Guinness. So was born what Oat would name the Belfast Carbomb (“carbomb” all one word), aka Irish Carbomb.

Wilson’s Saloon in those days was patronized by U.S. Navy sailors, and soon the Irish Carbomb’s fame spread far and wide. It became a staple of St. Patrick’s Day drinking in the States, and still largely is today. But it was and is despised in Ireland, where the IRA and car bombs are not lightly mentioned. Apparently, asking for an Irish Carbomb from a bartender in Ireland will earn you a cold stare at best. I suppose it would be the equivalent of walking into a bar in Japan and ordering up a Kamikaze.

In these politically correct days, disdain for an offensive name is not enough: That which is offensive must be banned. In 2010, the spokesman for an activist group in Ireland called FAIR (Families Acting for Innocent Relatives) demanded just that:

“I would have expected Americans, of all people, to behave more sensitively and responsibly. How would they like it if we developed the Al-Qaeda car bomb, the Twin Towers cocktail, or the 9/11 ice-cream sundae?”

Oat has since apologized for his insensitivity, saying he wished he could take the name back. Some American bartenders today no longer serve the drink. Others will do so reluctantly, but will only call the drink by the generic name of a Carbomb. Last year, when craft brewer Fat Point Brewing tried to introduce a St. Patrick’s Day “Car Bomb Stout” inspired by the shot, they were crucified on social media, and paid their penance with a large donation to the Red Cross.

Personally, I’d be open to trying a drink called an Al-Qaeda as long as it had booze in it. I haven’t had an Irish Carbomb in years, mainly because I decided that it’s a poor way to enjoy the greatness of Jameson; but I see no harm in ordering one, so long as there is no deliberate intent to start a riot. There are worse-tasting ways to get hammered, and the Carbomb has become a real American tradition on St. Paddy’s Day. Just be mindful of where and how you ask for it.