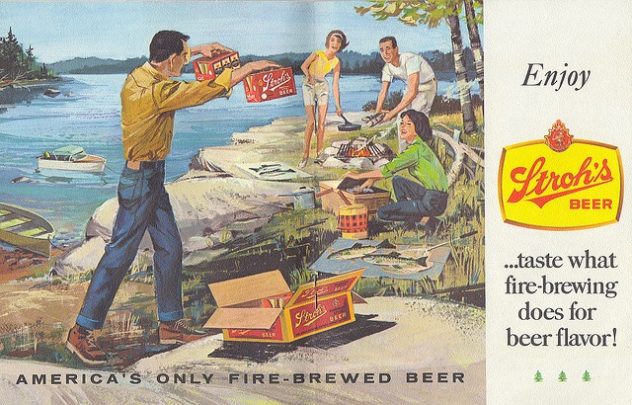 It took a lot of blundering and bad luck to bring down America’s number-three beer-seller back in the day, but the Stroh’s folks pulled it off. Stroh’s hasn’t been brewed in its hometown of Detroit since 1985, and the Stroh family sold the label (to Pabst, of all people) in 1999. A debased version of it is still hanging around, if you care to look for it.

Now comes word that Pabst is reviving the Stroh’s of yesteryear, based on the original recipe and with a higher (5.5%) ABV. It’ll also be brewed under contract in Detroit once again. Whether anyone will care or not is a different story.

If nothing else, Stroh’s has some history and tradition going for it. Founder Bernhard Stroh first peddled his homebrew in 1850, when he wandered around Detroit selling it door-to-door out of a wheelbarrow. What later became Stroh Brewery survived Prohibition selling near-beer, the only brewery in Detroit licensed to do so, and got a big head start on the competition following Repeal.

Stroh’s big selling point was that it was “fire-brewed,” meaning the beer kettles were heated with direct flame rather than by steam, the more common method. It made no significant difference in taste; but fire-brewing sounds impressive, and Stroh’s bragged about being “America’s only Fire-Brewed Beer.”

Until the 1980s Stroh’s was a regional brew, seldom found outside the Great Lakes. In 1982, the Stroh family bet the farm in acquiring most of Schlitz Brewing Company. Overnight Stroh’s became the third-biggest beer company in America and a national brand. But the move was a fatal blunder that stretched the company beyond the breaking point — a “minnow swallowing a whale,” as one Forbes reporter put it.

In 1985 Stroh’s shut down its Detroit brewery, to the dismay of Motor City residents, yet foolishly kept on acquiring other labels. In the 90s the best seller in its portfolio was not Stroh’s or even Schlitz, but… Old Milwaukee, and that thanks to some popular TV commercials that featured the “Swedish Bikini Team.” The Old Milwaukee bubble burst when the Swedish Bikini Team was deemed sexist, and some of Stroh’s own employees sued the company for sexual harassment. By 1999, it was time for the Stroh family to sell off and get out with what they could.

For all Stroh’s woes, the decision by Pabst to bring back the original version doesn’t seem like a bad idea. There’s still some nostalgia in Detroit for the hometown favorite — and in fact it won’t be available outside the Great Lakes right away, giving the old-and-improved Stroh’s a chance to get its legs. Upping the alcohol content is always wise. It’s possible this corpse will be walking the earth once again some day.