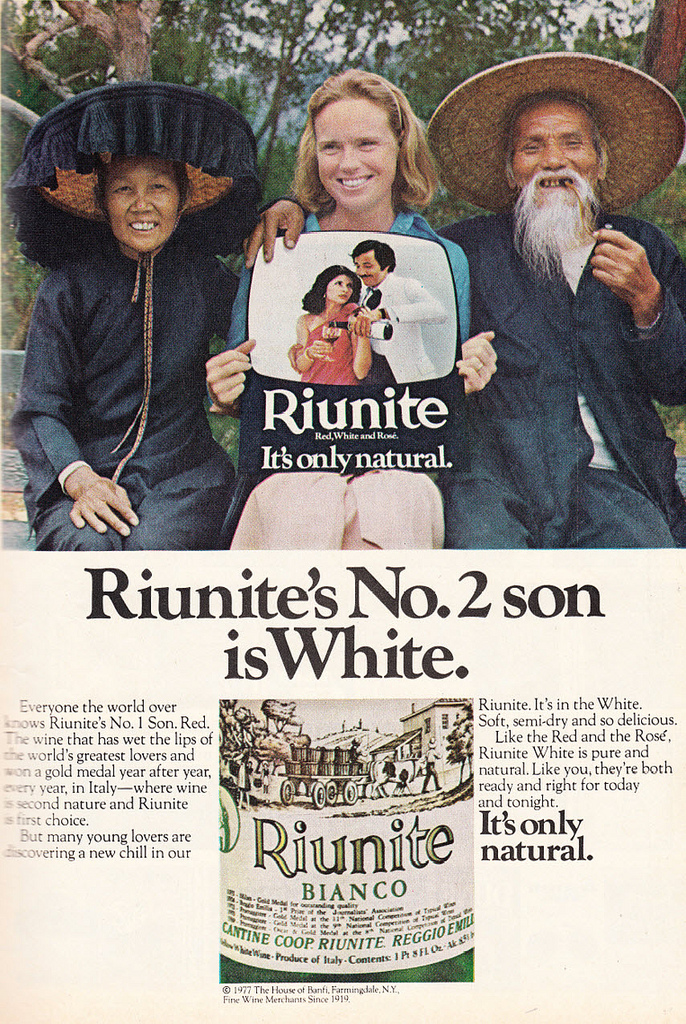 Barely a step up from Boone’s Farm, Riunite wine is an unlikely success story. It’s always been cheap, so it has that going for it, and being imported from Italy may lend it an exotic quality to some customers. What made it famous in the 70s and 80s was an inescapable TV ad campaign featuring a catchy jingle: “Riunite on ice, Riunite so nice! Riunite, Riunite!” In 1985 it became the best-selling imported wine in America, moving a record-breaking 11.5 million cases.

Fizzy, sweet Riunite is made from lambrusco grapes grown by a cooperative in the Italian region of Emilia-Romagna. American importer Banfi Vineyards first introduced it to the U.S. in 1967; the “nice” ads first popped up in 1978, and Banfi found itself with a hit. White and rosé versions followed the red (as the above ad boldly proclaims) and fans were encouraged to pair these new offerings with burgers and tacos. Low in alcohol (8% ABV) bubbly and fruity, Riunite was easy for the most novice drinker to get into.

Alas, being an entry-level wine is not a formula for long-term success. Like its counterpart Blue Nun — the German member of the Axis of Bad Imported Wine — Riunite turned into a joke as wine drinkers grew out of it, dragging the reputation of Italian lambrusco down along with it. Riunite is still a pretty good seller today (certainly better than Blue Nun) but its demographic is older winos who fondly remember the cheesy ads and jingles of yesteryear.

Thus in 2012 Banfi ditched Riunite’s iconic “nice” sloagn in favor of a new one: “Just Chill,” aimed exclusively at millenial women and emphasizing social media. Fans were supposed to play a facebook game called “Chill Chatter” meant to “inspire juicy conversation” about dating and wine. This ad campaign proved to be a flop.

Banfi went back to the drawing board just this year, bringing back the 70s-style bottles and labels but with yet another new slogan, “This is R Moment.” They’re also running new television ads, Riunite’s first since the early 90s:

The creative features multicultural groups of young adult men and women enjoying themselves in scenarios like beach parties, with taglines keyed to the “moment” theme: “This Is R Moment to…” make some noise, shake things up, set the world on fire, and “unite,” for example.

It would be nice to say that the “This is R Moment” ads will appeal to the millennial consumers Banfi craves, and are about to turn around Riunite’s fortunes. But I don’t think they R.