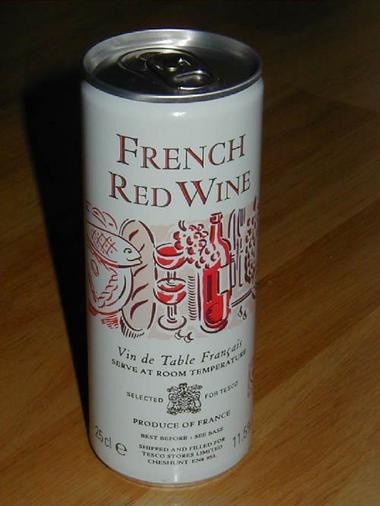 Screw-caps were the first affront to the stuffy sensibilities of wine snobs. Box wine, the old “goon sack,” followed. Now comes wine-in-a-can, sales of which are up 125% in the last year. Impressive, but it’s not clear whether canned wine is the “next great American drink,” as Money Magazine suggests, or just another fad.

Canned wine first appeared in the U.S. in 2004, in the form of Francis Ford Coppola Winery’s “Sofia,” named after the famed director’s daughter. Sofia “minis” sell in a dainty 187 ml hot-pink can and come with a free straw for sipping. Needless to say, Sofia’s market was and is limited to women.

Sales of canned wine finally took off in the last year or so as all the stars seemed to align. Can winemakers had the revelation to target men as well as women — “Mancan” wine, for example, explicitly appeals to men to “give your beer belly the night off.” Portions have gotten bigger than the meager single servings of Sofia. Can technology has greatly improved, eliminating any tinny aftertaste. Mega-wineries like Barefoot (an appendage of the Gallo Empire) got into the act, extending canned wine’s reach into the hinterlands.

For some people, pop top wine seems to have anti-snob appeal — an angle that canned wine sellers are eager to push. Can drinkers are encouraged to show off their carefree spirit, unbound by traditional conventions of how wine is “supposed” to be drunk.

Portability is can wine’s big selling point, although to my mind box wine already solved that problem. If a 3-liter box is too much to haul around, mini-boxes resembling kiddie juice boxes have been available for years. The only advantage I see of canned wine over a box is if you wanted to keep it iced up in a cooler. Then again, if the goal is merely to cool off, a cold beer sounds better to me.

For all canned wine’s recent growth, it still only makes up 1% of the US wine market. Compare that to box wine, which is something like 20% of the market after decades of fighting for respect. Pop top juice is off to a good start, but it isn’t there yet.