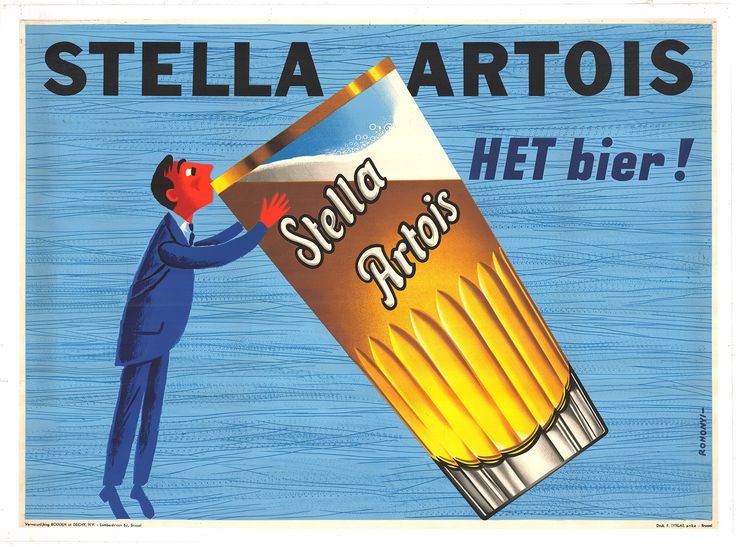 The bland Euro-lager with the fancy name, Stella Artois (or “Wife Beater,” to drinkers in the UK) sure gets around — at least outside its home country. In Belgium, it’s barely to be found outside of tourist traps, according to a report last week in The Wall Street Journal. Abroad, Stella isn’t hard to find at all. That has more to do with owner A-B InBev’s long reach than popular demand.

Stella Artois first arrived on the scene in 1926 (not “Anno 1366,” as misleadingly appears above the logo). Originally a Christmas, limited-edition offering of the Artois Brewery in Belgium, it was named Stella — Latin for “star” — after the Star of Bethlehem. People liked it, and the Artois Brewery started selling it year round. Operations were briefly interrupted by World War II, but afterwards Stella went international, and became popular enough that the original brewery was replaced by a mass-production facility.

One significant advantage Stella had was a slightly higher ABV (5.2%) than most pilsners. Its biggest fanbase is, or was, the UK, where it unfairly became associated with so-called football hooligans and other heavy drinkers. At some point it picked up the nickname Wife Beater, and an urban legend sprouted that a mysterious ingredient in Stella spurred drinkers to violence. (Another story — not credited by all — is that the Wife Beater nickname comes from the play “A Streetcar Named Desire,” in which the abusive Stanley cries out “Hey Stella!”)

Whatever the source of the nickname, a lot of people who should know better bought into Stella’s wife-beater image. Some UK pubs stopped serving it. In 2007, a judge named Stella from the bench in sentencing a man who beat up his ex-girlfriend’s new flame.

This negative publicity got InBev’s attention. The UK version of Stella had its alcohol content lowered. Then the marketing team went to work trying to class Stella up. A new “chalice” was introduced, supposedly the only glass suitable for such a high-qualty import. A ridiculous 9-step “pouring ritual” was trotted out, as if Stella were the equivalent of Guinness. Strategic product placement gave Stella cameos in Hollywood films such as Birdman, The Intern, and Ocean’s Thirteen.

All this still hasn’t stopped Stella’s fall from favor in the UK, where Carlsberg is now the #1 beer of choice. In the US, Stella makes up a paltry 0.7% of beer sales, and only ranks fourth among imports. In truth it deserves no better showing. Barely a step above Budweiser, this generic pale lager shouldn’t be anybody’s idea of a star.