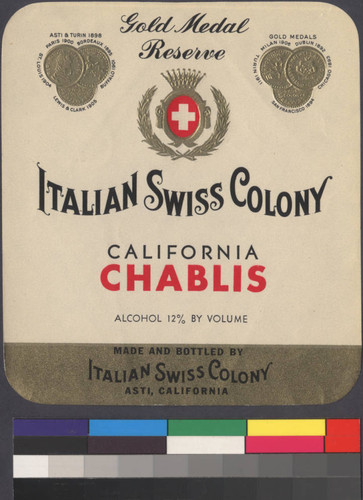 Gone and almost forgotten is Italian Swiss Colony wine company: Once a giant of American wine, now a footnote for hoochstorians. Its historic birthplace, the Asti Winery in California, was recently devoured in the all-consuming maw of E & J Gallo — bringing the story of ISC’s decline and fall full circle.

Italian Swiss Colony was so-named because it was in fact founded by Italian and Swiss immigrants. Based in Asti in now-famous Sonoma County, ISC grew from humble beginnings to become the biggest winery in California, and among the best-selling winemakers in the country after Prohibition ended.

In those days ISC cranked out cheap bulk juice for mass consumption. Their mascot was a yodeling, elderly gent in Alpine costume who spouted the catchphrase, “The little old winemaker — me!” The little old winemaker (voiced by actor Jim Backus, who also voiced Mr. Magoo) starred in radio and TV commercials that aired nationally, spreading the good word about Italian Swiss Colony’s fine products.

Nipping at Italian Swiss Colony’s heels was up-and-comer E & J Gallo Winery of Modesto, California. Ernest Gallo’s stated goal was to turn his brand into the “Campbell Soup company of the wine industry” — which necessarily meant the elimination of ISC. In 1952 Ernest actually plotted to buy out his much larger rival, but prudently backed off at the last minute.

Everything changed in 1957 when Gallo rolled out Thunderbird, “The American Classic,” granddaddy of the skid row bum wines. Italian Swiss Colony’s feeble response, when it finally came, was a knockoff called Silver Satin, a citrus-flavored white port just like Thunderbird. Silver Satin claimed to be “charcoal filtered” and boasted of being the “Perfect Cocktail Wine.” But Silver Satin was no competition for the original, and ISC suddenly had a mortal rival at the top.

Italian Swiss Colony didn’t go down right away. There were other battles ahead: When Gallo launched Boone’s Farm, ISC countered with a “tropical” flavored wine called Bali Hai that gained something of a following. But over the years they couldn’t keep pace with Gallo’s Thunderbird-fuelled growth.

Eventually Italian Swiss Colony was broken up, sold and re-sold, renamed and otherwise reshuffled into oblivion. Now Gallo has taken possession of the Asti Winery, last scrap of the Italian Swiss Colony empire. As the Santa Rosa Press Democrat reported at the time of the sale:

In the 1960s, Italian Swiss Colony was even larger than Gallo and both companies pursued the same consumer market, McMillan noted.

“I’m sure the symmetry of this historic purchase was not lost on (CEO) Joe Gallo for a second,” McMillan wrote in an email.