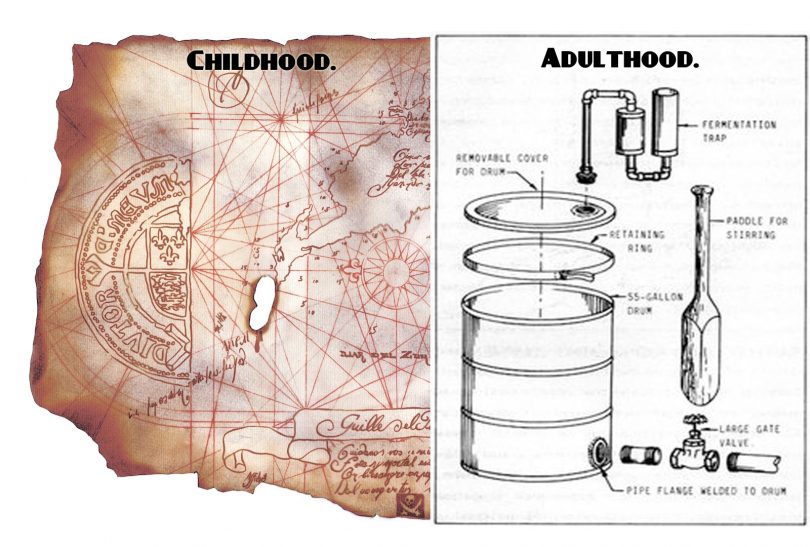 If you’re like me (read: have reached adulthood), then it has likely been a long, long time since you felt the same unbridled joy and sense of wonder that was the hallmark of many of our childhoods. Remember a time when The Goonies seemed less like a fanciful work of whimsy and fiction with a whole pant-load of racist stereotypes and more like a kind of video brochure for the thrilling adventures that the wide world had in store for us? Remember the feeling when we still held at least the spark of a belief in the old stories about stumbling upon a buried treasure, about following some obscure clues and eventually discovering a wonderland of riches and joys as a reward for our pluck and an affirmation that our wildest dreams could come true?

Yeah, neither do I.

And if you’re like me, you grew up and realized that the Universe is cruel and indifferent to our hopes and dreams, and before you know it, your definition of “ambitions” is redefined as “how in the name of Johnnie Walker Black am I going to make rent this month?” And yet, I may have felt that spark once again.

It turns out that a recent massive water leak in the town of Harvard, Massachusetts, lead investigators to look into the basement of a library that had been closed for months. We had our first clue (and apparently just about the only one). When investigators checked an old utility room in the basement, they found something that they frankly should have just kept to themselves: a functional still connected to the water lines and an undisclosed number of full bottles of shine. Their answer as to what to do about it? Form a committee to determine how to remove it (the buzzkills) and move the bottles of secret and illicit White Lightning to three different secure locations. It should be noted that the Old Library Distillery study committee is made up, curiously, of three people. There’s something about those numbers that I can’t quite put my liver on–something that makes me want to revisit the use of the word “secure.” Of course, I’d use the same term if I was on that committee, but it would not be in good faith.

Imagine it, though! A small-town mystery about disappearing water that leads to the basement of a disused library where, upon checking out what is objectively the creepiest part of any basement, a utility room, you discover a nigh-magical machine that takes everyday ingredients and turns them into an elixir that can sooth the wounds we suffer at the hands of a hostile and indifferent world, that can restore us to a sense of ease and relaxation in the face of every hardship yet to be visited upon us. It’s like finally finding One-Eyed Willie’s pirate ship full of treasure, but without all of the quality ’80s cinema-sanctioned racism and child abuse. Hell, it could even be an episode of Scooby-Do, for that matter.

Remember Scooby-Do? That was awesome.

My point being, stories like this make us feel like hidden treasures might still exist in this world. So if your water bill is slightly higher next month, consider breaking into buildings around town and hunting down those sweet, sweet secret stills that must surely be the culprits.

Also, if you’re in the Boston or Marlborough areas, know a lot of journalists around there, or if you have any connections with the Harvard Press (sadly, not the Harvard University Press), bird-dog me up some of that Harvard Whiskey. I swear it will be kept in a “secure” location. You know, for archival purposes.