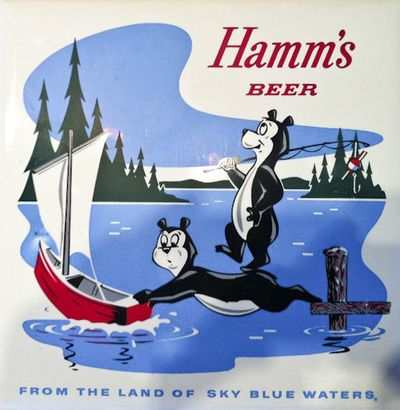 It’s all sunny skies these days in the Land of Sky Blue Waters. Sales of the once-famous brew are up 45% in the last year, according to Nielsen. It seems that a new generation has taken a shine to Hamm’s, turning it into a popular seller for the first time in decades:

The beer from the land of sky blue waters would finish out 2017 as the eighth-fastest-growing brand in the country. And its success would continue well into 2018—so far, MillerCoors associate brand manager Amber Smith says they’ve seen 96 percent year-to-date growth, bumping Hamm’s into the number-four spot.

Things didn’t look so rosy for the brand when it first started out. Founded by Theodore Hamm in St. Paul, Minnesota in the 1800s, the brewery barely survived Prohibition by producing near-beer, soft drinks, and sardines. No sooner was Prohibition repealed than the brewery took another harsh blow, when the heir to the Hamm fortune was kidnapped.

The culprits were Ma Barker’s gang, in alliance with “Public Enemy Number One” Alvin Karpowicz, aka “Creepy Karpis.” William Hamm Jr. was snatched on the doorstep of his home and spirited away to a boarded-up building, where he was forced to write a ransom demand for $100,000. The Hamm family paid up, and Hamm Jr. was set free — but it was a tough financial hit for a small-time, regional brewery.

(Some justice was served nineteen months later, when Ma Barker and her son Fred were gunned down in a shootout with the FBI. Creepy Karpis was captured and became the longest-serving inmate of Alcatraz.)

Everything turned around for Hamm’s in 1953, when the iconic, cartoon Hamm’s bear debuted on TV. The cuddly bear’s soundtrack was a drumming, faux-Indian rain-dance. The “land of sky blue waters” lyrics were reportedly inspired by Longfellow’s poem The Song of Hiawatha. These famous ads turned Hamm’s into a huge hit and made it a national brand, playing in the beer big-leagues with Budweiser and Schlitz.

The Hamm family got out of the beer business in 1965, cashing in at the brand’s peak of popularity — and starting a long downhill slide. The label passed though the hands of multiple owners, finally winding up in the MillerCoors portfolio. The St. Paul brewery was shuttered, and Minnesota’s most famous beer is now made in Milwaukee. When nannies started screeching about cartoons being used in beer ads, the beloved bear was retired. That looked to be the end of the line for Hamm’s.

Until now. Maybe modern Hamm’s fans are on to something. For what it’s worth, a panel of craft brewers recently declared Hamm’s the best macrobrew out of the sixteen they tasted. The recipe is reportedly unchanged (or very close) to what it was in its heyday. There are worse beers that have unexpectedly been given a chance at second life.