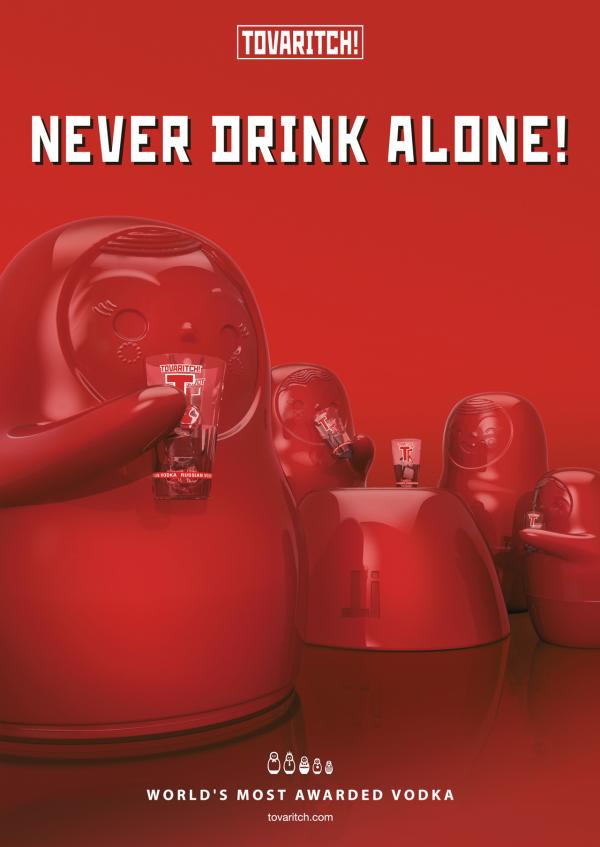 The self-styled “world’s most awarded vodka” is called Tovaritch! (exclamation point theirs, not mine). It is a worthy booze that has turned into a popular seller. Too bad the brand’s advertising campaign — headlined “Never Drink Alone!” — is so lame.

Tovaritch! (or Tobaritch! as it labels itself in the US) arrived on the scene just ten years ago; but its secret recipe originates, so the company claims, from Moscow in the time of Catherine the Great. Tovaritch! has in fact won a lot of medals at spirits competitions. It is reasonably priced, especially in comparison to Grey Goose and other so-called “premium” vodkas. It sells in an attractive bottle. 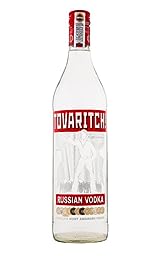 There wouldn’t be much to complain about, except for this “Never Drink Alone!” bullshit. Where to begin? It contradicts the the 45th Rule of Boozing. It is exactly wrong, as a certain well-known modern drunkard has explained. And no customer wants to be shouted at about how to consume the product. This is especially unwise when your best customers are drunks who don’t want or need such advice.

“Tovaritch” supposedly means “comrade” in Russian, and maybe that’s the idea behind the campaign — that a booze called Comrade should be shared with friends. Maybe. The gibberish explanation for the campaign makes it hard to figure what the marketing geniuses were thinking:

Created in collaboration with Proximity Madrid, a Spanish global marketing agency, the concept is designed to “appeal to a wide range of customers, irrespective of gender, age or ethnicity”.

“We firmly believe that there are no limits to imagination. And this time imagination is going to take us – and you – places,” the brand promises.

Whatever. Anything would have been more appealing than the too-clever-by-half “Never Drink Alone!” pitch. It’s more than just bad advice, it’s bad business.