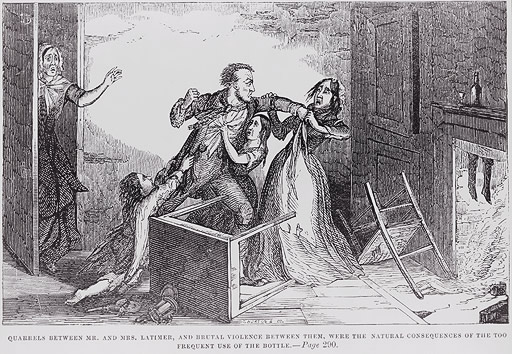 For everyone that gets into the spirit of “New Year’s resolutions,” there’s a popular movement called “Dry January,” the brainchild of a British non-profit that wants you to consider complete abstinence from alcohol for the entire month. Their aim is get you to take a broader view of the role that the Creature takes in your life, ostensibly to show you what you’re “missing out on” when you choose the booze over…other things? There are other things?

Their webpage puts forth some enticing claims, for sure:

So go on, take time out and prove to yourself that you can say no to the tipple.

Now, lest you think this is a smear job against Alcohol Concern, let me get this out of the way: they appear to be an above-board and honest organization (and I even looked into their corporate sponsors and major donors list in case there was something fishy), so cheers to them. They’re out there working for what they believe in, and that’s a good thing. Nevertheless I (and I assume you, faithful reader) won’t be signing up anytime soon, but Godspeed to those teetotaling maniacs.

However, there is another side to the story of Dry January, and that side needs advocates like us Hammers. We need to have an honest conversation about the role of drinking in both its personal and societal impacts, and I truly do not think that Dry January is the way to go about it.

With that said, here’s a look at the saucier side of Dry January:

First, there’s the plain fact (that we’ve mentioned before) that UK drinkers actually make the government more money than they cost (through pesky little things like hospital treatment and emergency services and paying the rozzers for booze-related calls) to the sweet, sweet tune of about $10 billion. Yes, you read that right–it is billion and not million. Adjusted over to Pounds Sterling (at the time of publication), that’s about £6.97 billion. A mid-2014 estimate puts the total UK population at 64.6 million people, for comparison. That report makes the salient point that even if the British government cut the already hefty taxes on alcohol in half, the UK’s stalwart souses would still be a net benefit for taxpayers.

Fun fact: that £6.97 billion is almost 70% of the UK central government’s 2015 budget for national transportation spending, and alone is twice their budget for the national road system. Puts things into perspective, doesn’t it?

That being said, the good drunkards of those sceptered isles are pulling more than twice their weight in terms of civic duty, which puts them in a venerable class indeed. We all know that public works don’t happen unless they have funding, and some of us do more than others to make sure that the schools stay open, that the roads and bridges get built, and that the owners of the liquor stores near us get to take their families out for frustrated and disappointing holidays where they can learn just how rubbish a caravan weekend really is. That’s investing in the children, and children are our future after all.

Also, if you average out just the money that UK drinkers net the government over 12 months, one month of their imbibing generates about 580 million GBP, or about as much as the central government spends on pollution abatement for the year (according to the budget report). That makes a trip to the pub downright good for the Earth.

Second, the aims of Dry January are admittedly very narrow in their focus: how does giving up alcohol affect you. Another UK commentator had the good sense to argue that giving up bottled water can do a broader good for the world instead of just a narrow good for yourself. Sounds like an easy resolution to keep and one that could have a measurable benefit on a global scale. When was the last time you saw a drunkard carrying around bottled water from the corner store? It’s like we’re already part of a great crusade for the health of the environment and we didn’t even know it. Way to go, us!

Granted, Alcohol Concern is a registered charity that wants to use Dry January as a fundraiser to support their national programs to address public health issues related to alcohol and support their various agendas, so their abstinence idea is just a platform to support their broader service goals. Fair enough. Of course, when they claim that participants experience “huge savings” by not drinking for the month, they follow that with gentle prodding to donate that money to them. So let’s rule that “benefit” out, which brings us to another point…

Third, let’s talk about the kind of drinkers who would participate in Dry January. Alcohol Concern makes this judicious point:

Note: It’s really important to state that Dry January is NOT a medical detox programme and should not be undertaken by people with alcohol dependency issues. This is both an awareness raising campaign and a fundraiser for Alcohol Concern to help people have a healthier relationship with alcohol. If you think you might be alcohol dependent, have a chat with your GP first.

Alcohol Concern is, ostensibly, concerned with the dangers (both personally and inter-personally) of drinking. I won’t begrudge them that, but I do take issue with how their approach plays out. Arguably, the people who could most use alcohol abstinence or a reform to their drinking are those who fall into the category of “alcohol dependent”–those for whom the Creature is no longer a thing of joy and merriment, but a simple substance they need just to function. For them, the Drink is joyless and compulsory, and that way madness lies. In an honest conversation, we have to acknowledge that these afflicted souls are in need of support, help, and love so that they may find some measure of peace and happiness, if at all possible.

However, Dry January is the exact kind of thing that could have lethal consequences for those who could benefit from it most. If you have lost your path on the Way of the Drink, a sudden cessation could kill you:

Here’s where the difficulty and risk come in. When a person stops drinking alcohol suddenly, just up and quits because he or she thinks it’s time to do so and it’s easy to do, the consequences can be deadly. Sudden alcohol cessation can cause hallucinations, convulsions, and even heart seizure that may ultimately result in death.

If it is not a self-detox kind of thing, then who (other than the organizers) benefit? Even Alcohol Concern is careful to warn that this is not a program to treat any kind of dependency. So who is it for, really? It’s clearly not for those who might benefit most, so it becomes clear that it is geared towards those who either want to jump onto a new fad in order to feel like they are a part of some larger charitable good (which is debatable) or those who fall for fear-mongering pseudo-medical advice that says that enjoying a  regular drink makes you a monster.

I have written about this shame-based nonsense before, and it angers me every time it rears its petulant little head.  Those average folk who fall for fear- and shame-based arguments are part of the principle audience for a movement like Dry January since they are susceptible to sophistry and promises of quick personal gain at minimal personal expense. The other part of the audience is that group of people for whom a drink is a non-issue, a little laugh after work that means nothing to them. And they may just be the most joyless of all.

Neither of those groups would be the ones who could benefit most from a month of total abstinence, so I am failing to see the real point of Dry January. I think that it does a disservice to the very issue that it purports to champion. For any good that it might do, it has a dark heart that preys on those for whom drinking is either not even an issue or those who buy into any new claim about “living your best life,” which usually means avoiding the things that make life worth living.

Fourth, let’s look at what Dry January could mean to us hearty souls who refuse to buy into that nonsense. The bars will be a little emptier, the lines at the liquor store will be a little shorter, the wet-blankets will be absent from our usual watering holes. Granted, the month is almost over, and maybe you have not seen any change in your locals. Either way, life goes on, and some of us know that it sometimes takes an anchor to keep the ship stable in a maelstrom.

So let us all raise a glass to the fair-weather drinkers who have abandoned ship amidst a storm of nonsense while we keep sailing on. We even have a rallying cry to carry us forth in just this kind of time: Alestorm’s “Drink”.

Anyone in for “Flooded February?”