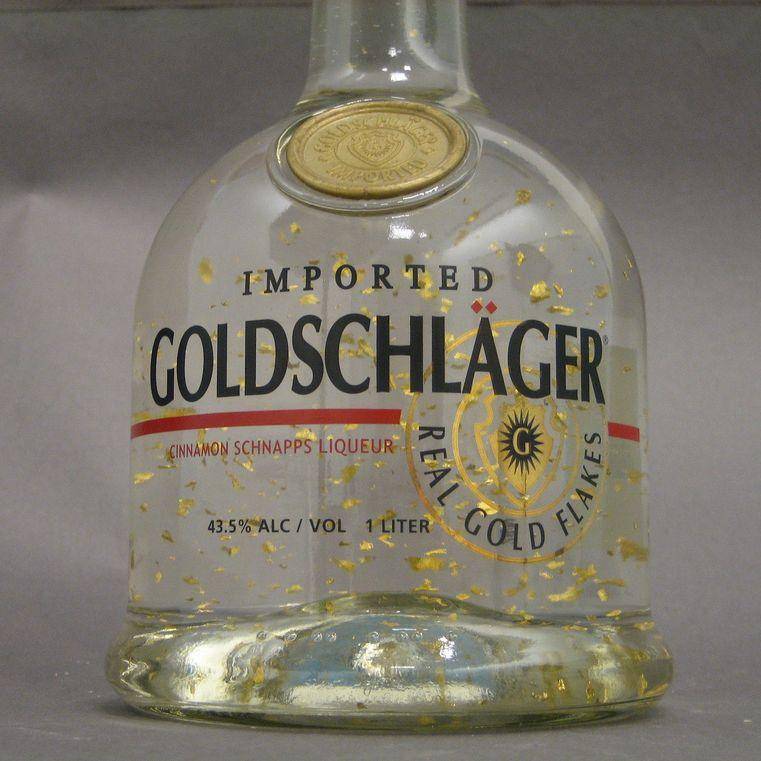 Turns out that Goldschlager – the Swiss-made cinnamon schnapps infused with flecks of gold – is still around. I don’t recall seeing it in years, but it apparently still exists, having been sold by Diageo to Sazerac Co. two weeks ago. I’d say good luck to Sazerac trying to revive this false idol, but maybe they know what they’re doing.

Goldschlager is the spiritual descendant of a centuries-old drink called Goldwasser, a gold-flecked herbal liqueur that was a favorite of the czars. Goldwasser is still trademarked in Germany to this day. At some point the Swiss decided to get in on the act and Goldschlager (which means “gold beater”) was born.

The flakes in Goldschlager are genuine 24-carat gold – but if you somehow managed to harvest them from the booze the value would only be about $4. At least they look nice floating around in the clear liquid. Goldschlager had a brief moment of popularity in the 1990s, when a bizarre urban legend cropped up that the flakes would cause tiny cuts in the throat, allowing the drinker to get drunk faster. Of course Goldschlager’s marketing team jumped all over that, running ads that simply showed the bottle with the slogan “Be afraid. Be very afraid.”

And that’s been about the last we’ve heard from Goldschlager until Diageo’s fire sale. It got a brief mention in the 2007 teen comedy Superbad (synopsis: high school boys struggle to buy booze and get laid). If you’ve never tried it, you’re not missing much: ordinary cinnamon-flavored booze with a lot of sugar. Much like Fireball, come to think of it, and maybe that’s what Sazerac sees in it. But it would take some kind of Midas touch to get Goldschlager to shine again.