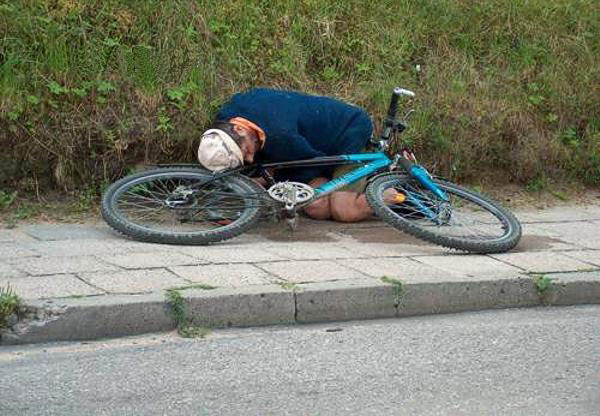 The world-famous Modern Drunkard Podcast recently noted that drunken bicyclists can actually get a DUI for boozy biking in the state of Colorado.  Turns out, Colorado is not alone:  21 states and the District of Columbia treat impaired pedaling as a crime, in some cases the equivalent of DUI — with equally harsh penalties.  Of all the asinine laws that needlessly oppress drunkards (not to mention bicycling enthusiasts who just want to have a few drinks), these must be the most backwards.

Surely* it is a better world in which potentially impaired persons can opt to bike instead of drive a car.  Why take that option away by criminalizing it?

Surely drunk bicycling is the very definition of a victimless crime.  The drunken cyclist who loses control and wipes out is in for a painful meeting with the pavement, but the pavement doesn’t care.  Whatever bodily harm ensues can be mitigated by wearing a helmet, elbow pads and such-like, which most serious cyclists nowadays seem to do anyway.

Surely it is absurd to revoke a man’s license to drive a car to penalize him for drunk bicycling.  Yet this has happened in the state of Oregon, which seems to be the most zealous in cracking down on the non-problem of “BUI.”

Surely lawmakers in the 21 BUI-criminal states will wake up and realize how nutty all this is, won’t they?  I won’t hold my breath.

* Before anybody brings it up — No, I’m not calling you Shirley.