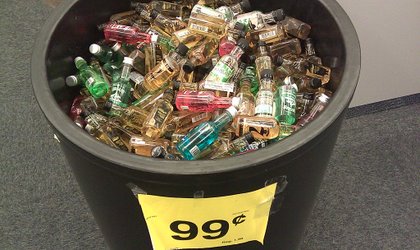 Who knew that New Mexico was such a hotbed of mini-bottle boozing?

Last week the Santa Fe, New Mexico City Council went ahead and outlawed the sale of individual mini-bottles of booze. Apparently Santa Fe’s neighbor Taos was also considering such a ban, but has now decided to hold off and await developments to the south.

Billed as an anti-littering measure (even though Santa Fe already has laws against littering on the books) one suspects the Santa Fe ban’s real aim is to thin the ranks of panhandlers, winos, and other of society’s outcasts who are more likely to drink by the shot. However desirable this might be, it is cowardly and dishonest to pretend the ban is a blow against litterbugs. The victims will be liquor stores and gas stations, not coffee shops and fast-food joints whose foam cups and wrappers are just as likely to be discarded on the street.

Santa Fe liquor store owners are now banding together to sue the city, and rightly so. Taxpayers will be on the hook for whatever legal costs are incurred defending this absurd law — money that could be more productively channeled (litter patrols? greater police presence in skid row areas?) elsewhere. Perhaps the good people of Santa Fe will remember next election.