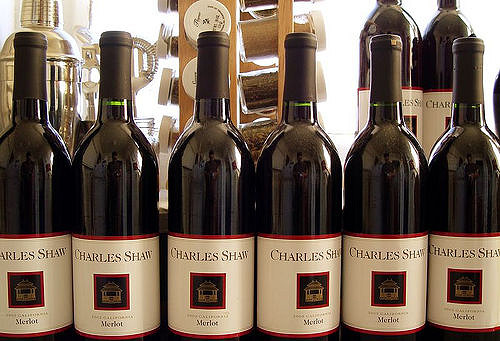 Yahoo! News stirred things up with an April Fool’s gag a couple weeks ago, breaking the “news” that popular grocery chain Trader Joe’s was closing all its stores and discontinuing all products. The story had legs because Yahoo cruelly violated the rules of the game and dropped its bogus bombshell on March 31st. Fans of cheap wine, especially the store’s exclusive brand Charles Shaw (aka Two Buck Chuck) didn’t appreciate the joke.

But Two Buck Chuck, the box wine in a bottle, isn’t going anywhere. It’s been a monster seller since Trader Joe’s first brought it out in 2002, when it sold at the wino-friendly price of $1.99 and bargain-hunting customers bestowed its nickname. Prices have climbed some since then, and it’s not the sensation it was at first, when odes were written to its miracle powers. Still, Trader Joe’s projects to move its one billionth bottles of Chuck sometime in 2017.

The Charles Shaw label is now owned by Fred Franzia: Founder of the Bronco Wine Company, nephew of Ernest Gallo, and a man who knows a few things about mass-producing cheap wine. He bought it in 1994 from a banker-turned-winemaker named Charles Shaw, whose dreams of being a Napa Valley bigshot sadly ended in bankruptcy. At last report, Mr. Shaw had abandoned California wine country and was working for a software firm in Chicago. It’s one of the oddities of Two Buck Chuck that the man whose name appears on the label has nothing at all to do with the product inside.

Franzia paid $18,000 for the Charles Shaw label — peanuts to him — and sat on it until the exclusive deal with up-and-coming Trader Joes’s came along. Bronco is based in California’s San Joaquin Valley, not exactly noted for producing great grapes. But the Charles Shaw juice is shipped up to a plant in Napa for bottling, so buyers can kinda-sorta claim that their Two Buck Chuck is Napa wine.

The grapes are machine harvested, not hand-picked, a major reason Chuck sells for around two or three bucks. Franzia also claims to be a “pioneer” in the use of lightweight bottles that reduce shipping costs. And of course there are no advertising costs to factor in. Chuck thrives on price and Trader Joe’s stamp of approval.

Two Buck Upchuck is what its detractors call it, along with “crap” and “swill.” They go too far, I think. It’s about on par with cheap box wine: Good enough for everyday drinking, and it does the job. The biggest difference between Two Buck Chuck and, say, Peter Vella is that Chuck comes in a nice-looking bottle, with the added satisfaction of hearing the cork pop when it’s time to drink.

Not that its fans care what critics say. It may not be selling at the pace it once did, when buyers backed SUVs up to Trader Joe’s loading docks to haul it off by the case. But Two Buck Chuck shows every sign of sticking around a while.