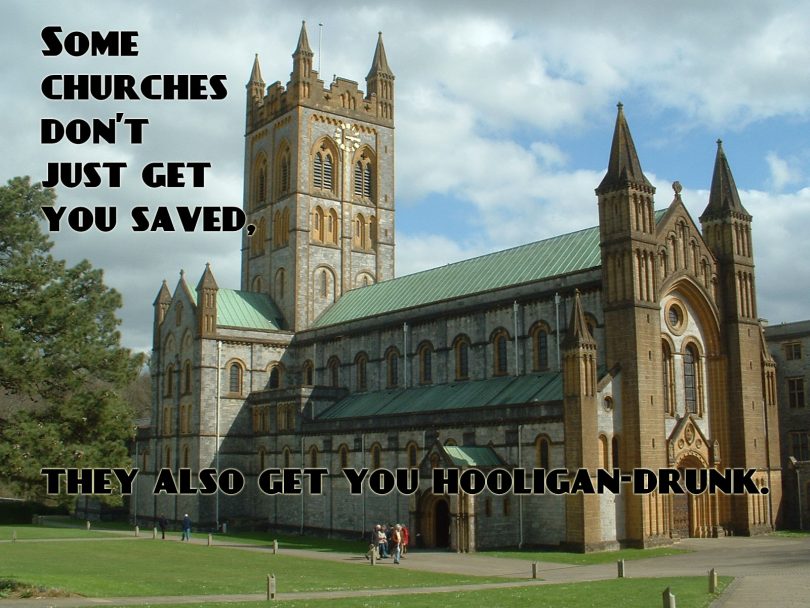 Gather round, children, and let me tell you the tale of a strange and mysterious creature that has roamed this Earth for more than a century, surviving both the ravages of two global wars and the impudence shown by those wielding “common sense” against the collective Drunkard Nation–the creature that is Buckfast. It is a creature with a storied history and a fearsome heart. Much like the Krampus, this devilish little critter does not come with tidings of comfort and joy, but with a fundamental and irrational hatred of you and everything you love. It is, as far as I can tell, the only appropriate libation to raise in toast at the blackest of black Sabbaths, a creation of holy men of the Benedictine order that tastes only of hate and misery and a pure, unbridled willingness to get as far out of one’s head as possible. It is a fast-lane exit from sanity with a speed limit sign that’s just a question mark. It’s not pleasant, but the right choices in life rarely are. Let’s all learn about Buckfast. It won’t be pleasant, but you need to know.

And New Zealand is bracing for its inevitable dark arrival.

Two things are in order: first, you’ll want a soundtrack for this article, and the greatest of great pirate-metal bands Alestorm has a fine tune called Buckfast Powersmash about this very creature, and these lines are all you need to need to know about Buckfast:

And if you read that news piece linked above, you’ll know that Buckfast was the drink of choice of 43.4% of hooligans arrested in Scotland who admitted to drinking before their offenses. That’s a damn impressive number whether it was about “what you had to drink” or “what kind of phone do you own” or “who made those lovely balaclavas“. Here in these United States, we’ve seen our fair share of energy drink/alcohol hybrids like B^E and Four Loko, both of which were terrible and have either been discontinued (in the case of the former) or so heavily banned (in the case of the latter) that they are virtually absent from our markets.

However, New Zealand is staring down the barrel of another drink that features both a 15% ABV and more caffeine than a can of Red Bull, and some of them are scared. Sure, it has a history of being linked to violent crime, and sure it contains a questionable combination of the depressive alcohol and the stimulant caffeine, and sure it’s pretty terrible (I know, since I got my hands on some after reading about it on bumwine.com and got curious, and it’s just several kinds of unpleasant), but it has a storied history and it really isn’t any more dangerous than Everclear or any other high-proof hooch–the danger seems to be in the fact that it contains caffeine which can mask the symptoms of inebriation and keep a drinker going for longer than usual. After all, at 15% ABV, it’s not any higher than a lot of fine wines, so the caffeine seems to be the problem.

And yet there is no backlash against coffee shops or providers or the distributor of Red Bull in that weird little country clinging to the coast of Australia and Peter Jackson’s coattails. And as long as you can get a Vodka and Red Bull in a bar with impunity, what’s wrong with cutting out the middle-man and selling a caffeine/alcohol hybrid in the shops? Is there really that much of a difference? Besides, what can Chistchurch offer that can’t be found anywhere else? I’m honestly asking since I’d love to go there but not if I’d run into the same neo-prohi nonsense I can get at home.

Actually, I’d love to go there anyway. So if you have an open couch, let me know.

In short, we all seem to face the same demons the world over, and there’s always a struggle somewhere. Here’s to all of our kiwi brothers and sisters: cheers and may god help you all. We appreciate Bret McKenzie and Jemaine Clement, and I guess Crowded House‘s Neil Finn was pretty great. So stay strong, New Zealand.

Seriously, this is excellent. Don’t ruin it by getting all prudish on us. We want to like you, but Australia is just such a willing partier. Be cool, and we’ll invite ’round next time.