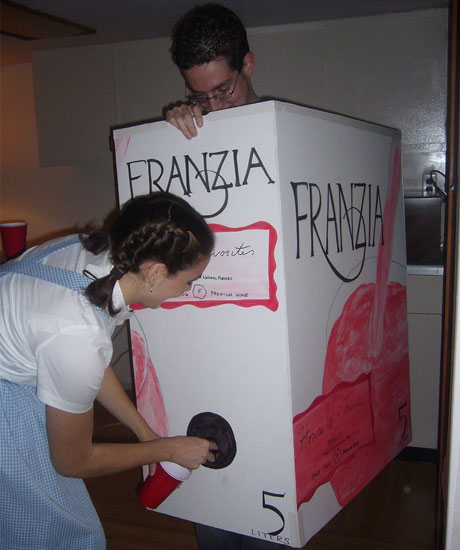 The self-proclaimed “world’s most popular wine” is old friend Franzia box wine, nectar of college students, the elderly, and the broke. Of course, whatever popularity Franzia can claim is due to cheapness, not great taste. But there’s no denying it has greatly improved since its early days, and it’s a good value as long as you’re not too picky about wine.

Franzia has been selling cheap wine since the end of Prohibition. Founding matriarch Teresa Franzia mortgaged her husband’s California grape farm to open up Franzia Brothers Winery, to be operated by her brood of numerous sons. Backed by Teresa’s investment, the brothers started cranking out sweet port and sherry under the advertising slogan, “Make friends with Franzia.”

Teresa’s gamble proved to be a smart one, and the winery prospered for decades. In 1973 the Franzia brothers sold their winery and their name to an operation called The Wine Group, then a subsidiary of Coca-Cola. The result of this controversial sell-out is that the Franzias today are no longer involved in making the wine that bears their name.

It turned out that wine and Coke didn’t mix, and The Wine Group was spun off into into its own company. But afterwards, The Wine Group had the inspiration to start selling Franzia in a box — the first box wine ever to appear in the US — and its fortunes were made. The company is now the 3rd-biggest wine seller in the world (behind E & J Gallo and Constellation Brands) thanks almost entirely to Franzia boxes, and the legions who drink them.

Foremost among those legions are college kids. Budding geniuses at Institiutions of Higher Learning came up with Franzia drinking games like slap-bag and Le Tour de Franzia, which mimics the stages of the Tour de France and may (rules vary by location) involve drunk bicycling.

Franzia was dragged into international headlines in 2012, when a frat brother at the University of Tennessee named Alexander Broughton turned up a local hospital with a .40 BAC and “damage to his rectum.” Another frat brother told doctors that Broughton was given a Franzia enema, the detestable practice known as butt-chugging. Broughton, however, maintained that he was merely playing Tour de Franzia and got so hammered that he “defecated on myself.” This sorry saga ended with the fraternity being suspended from the university.

Franzia didn’t deserve the bad publicity Broughton brought upon it. It’s not a bad product, though some flavors are worse than others: Franzia Fruity Red Sangria has a stomach-churning 9 grams of sugar per serving, the wine world’s answer to Hawaiian Punch. But the basic varietals are good enough for everyday drinking. There are worse ways to get drunk, and few that are cheaper.