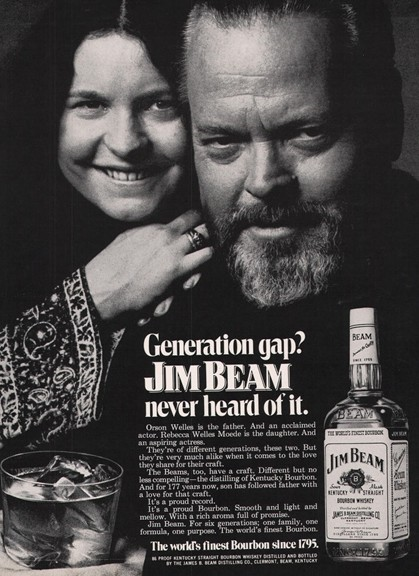 He revolutionized radio with his notorious “War of the Worlds” broadcast, theater with his modern-dress critique of fascism in Julius Caesar, and cinema with the groundbreaking Citizen Kane. Add to the list of Orson Welles’ achievements that he was literally the biggest, and maybe the best, pitchman the liquor industry has ever had.

Orson Welles would have been 100 years old had he lived to see 2015. Unfortunately he died in 1985 at the age of 70, although that might be considered a pretty good run for a 350-pound man. Forever short of funds for whatever new project he had up his sleeve, in the 1970s he started doing ads to make ends meet. “I’d rather do an honest commercial than a dishonest film,” he said, according to one of his many biographers, Frank Brady. That was exactly what made him such a great spokesman. An uncompromising artist, he made audiences believe he thought Paul Masson really was a fine wine.

Welles’ first foray into booze advertising was the Beam ad pictured above, one in a series in their “Generation Gap” ads that appeared in the Vietnam era. The young woman on his shoulder is Rebecca Welles, Orson’s daughter with Rita Hayworth.

His first TV spots were for Carlsberg (“probably the best lager in the world”) in 1975. That same year he also pitched Domecq Sherry on British TV, which was trying to take on venerable UK brand leader Harvey’s Bristol Cream. The first round of Domecq ads were so successful, according to Brady, the company flew Welles to London for further takes — in two first-class seats, with the armrest between them removed to accomodate Welles’ frame.

The Domecq triumph led to Welles’ long-running association with Paul Masson Winery, and the epic “no wine before its time” tagline. These ads need no introduction, but if somehow you’ve never seen the outtakes of Welles drunkenly trying to sell Paul Masson’s “California champagne,” do so here.

By 1980 the Welles-Masson alliance was starting to fray. According to Welles’ frequent dining companion Henry Jaglom, Welles referred to the winery’s ad people as “sad sacks” and disgustedly refused to compare their wine to a Stradivarius. The winery too was tiring of the relationship. In the diet- and fitness-conscious 80s, drinkers began gravitating toward lighter drinks, and Orson Welles was decidedly not the man to promote Masson’s light white wines. Welles was fired and replaced by the rail-thin Sir John Gielgud, then fresh off his triumph as Arthur‘s butler.

The Masson spots were Welles’ advertising Citizen Kane, never to be equalled again in his career. His next gig was on Asian TV shilling for G&G Nikka Japanese Whiskey: “Man, a wanderer in life, yearns for an oasis, but is tricked sometimes by a mirage,” Welles intoned, in what was either deep wisdom from the East or a load of horseshit. “G&G. It’s no mirage. It’s an oasis.” The ads cost Welles a 5-year contract with a French cognac house, according to Jaglom, when the stunned owner of the house happened to see the ads on TV in his Hong Kong hotel room. G&G ended Welles’ career as a booze pitchman, and a few years later he was gone.

Maybe other celebrity endorsers have sold more booze for their employers and made them more money, but none did it with the same flair as Orson Welles. Raise a glass to the old master in this centennial of his birth. I’d say it’s time.