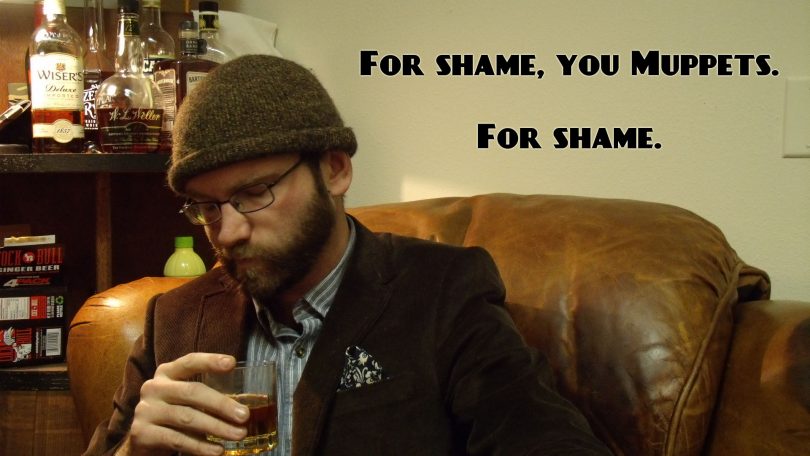 So it has come to pass: this year’s release of the Pappy Van Winkles is upon us. If you’re not a whiskey fan (read: dull), then this won’t mean much. That’s why I exist: to help you be a well-rounded and functional member of our noble ranks. The Van Winkle line of whiskies are released only once a year (as many fine bourbons and other whiskies are) by the Buffalo Trace Distillery to a grotesque degree of fandom. I’ve written about this before, but my words have had no effect. If you haven’t already taken that sage nugget of advice to heart, then you need to. Immediately. It rides high on the strong writing shoulders of my beloved colleague Bryan Dent and his work chronicling the massive theft ring earlier this year. Like I said, we’re here to help.

Being the reasonable inebriate that I am, I can only assign the blame in one direction. Sadly, that direction is towards you. You didn’t do enough, and now we have people pitching tents in front of stores like it was some kind of Miraculous Panacea Blowout sale. Spread the word of the Brutal Hammer and help stop this kind of faux-connoisseur nonsense that leaves too many great whiskeys in the shadows while one product gets lifted above the heads of the unwashed and uneducated masses to unrightful heights. You kids know social media. Get on that.

So this is it: the Pappy release season. Woo. If you’re still clamoring for a bottle, then here’s a map that charts where bottles have turned up in the market. Hint: unless you’re really close to Kentucky, you’re out of luck for now. The Buffalo Trace distillery releases their (admittedly depleted this year) stock on a market-by-market basis. It’s out there right now, and that’s actually a double-edged sword in terms of whiskey appreciation.

On the one hand, sure, it’s good stuff. As the previously linked article will tell you, I’ve had a chance to taste some of the PVWs and ORVWs before, and they are tasty. However, they get too much acclaim because of their rarity. For starters, the last of the original Van Winkle owned and produced stock is (potentially, if it still exists) going into bottles as the Pappy 23 year for this release (since the original distillery was bought out and production was moved back in 1992).

If you want to do a bit of sleuthing, try tracking down the dirty secret that some of that Stitzel-Weller (the originators of Pappy van Winkle) mash and all made its way into the Jefferson’s Presidential Select 17 and 18 year old line.

The economics and the history don’t necessarily matter all that much though, since this article is about how very, very disappointed I am with you all.

Just look at that face at the top of the page. It knows remorse, and that remorse is from our collective failure as drunkards to stop this Pappy nonsense. More people are looking for it than have ever tried it, and that’s based on sheer numbers. The demand far exceeds the supply now, and that’s due to word-of-mouth hype gone mad. To their credit, Buffalo Trace hasn’t taken undue advantage of that fact and have kept their prices relatively reasonable. They could charge 5 times the retail price and still sell out, but they don’t. That deserves respect, and respect we will show them.

To everyone camping out for the release: stop it. It’s embarrassing, and it shows only one of two things. Either you have more money than sense and just want to be “in” with the “hip” new thing the “youth” are into these days in order to feel some sense of relevance (despite the painful shallowness of your soul and all of the predictable choices you’ve ever made), or you just want to experience something great in the world of whiskey in order to feel alive again. If you’re one of the savable members of the second group, then let us help you. Our arms are open, if not always perfectly under our control.

You and me–let’s take a journey together: Sure, the other kids are all lining up for the shiny new toy of the season, bu you know what? It won’t bring them lasting happiness. That stuff only comes out once a year, and all it gives you is bragging rights. That’s it! If you want something great that you can get all year round, why not go for something off the beaten path (so to speak), like one of the better Bottled-In-Bond Kentucky Straights, the 10yr Henry McKenna? Why not something weird and leathery like Bib and Tucker? Or how about just an obscene amount of Lord Calvert?

Chasing rarity with fat stacks of cash is ridiculous. If you want to pay rent-levels of money for some Pappy, maybe you should save those bills for a while in order to do something truly legendary with them: buy the secret Wu Tang Clan album. And then give me a copy, naturally. That album aint nothing to fuck with.

And neither is good sense in the world of whiskey.

However, if Pappy’s your jam, then godspeed and good luck. We wish you well, but we won’t wait up for you. We’ll all be having a drink together while you’re camped on a sidewalk.