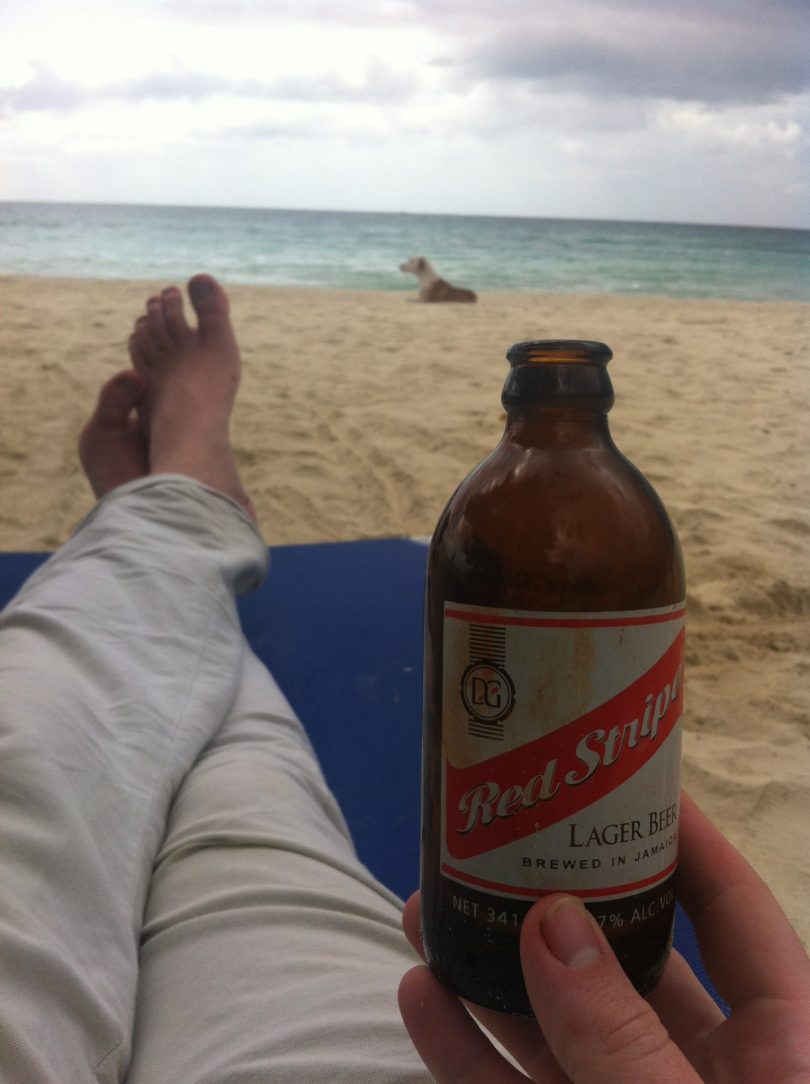 NEGRIL–There he was: a shambling, sun-baked ape of a man listing across the beach as storm clouds gathered on the horizon. He was a leathery shade of red usually reserved for salamanders and  fire engines, his eyes blood-shot, his feet bare, his balance barely holding together. To quote the Good Doctor, “Stoned. Ripped. Twisted. Good people.” If anyone could give me the skinny on the bar scene around here in Negril, it would be him: an ex-pat named (appropriately) Pat, and not a man to shy away from another drink.

Travel anywhere and look hard enough and you will find some community of ex-pats who have settled in and tried to stake a claim in foreign lands. They have invested the kind of time necessary to sort out the tourist traps from the genuine articles, the friendly joints from places where the wayward drunk will be less-then-warmly welcomed. On this chance encounter, Pat was quick to tell me that he has to be cautious not to run his mouth about most places for fear of offending the local owners. As he put it “I’m a white guy–I just can’t say anything bad about the bars here. They know each other, and they talk.” This got me to thinking, how do obvious outsiders in a country whose history is filled with violence and exploitation at the hands of European and Western powers go about getting properly blurred without offending our hosts or coming across as just another gaudy tourist toting fanny packs and Hawaiian shirts, traipsing around as though we own the place…again? A good and proper drunkard knows that a certain level of class and decorum is key, no matter how many fathoms deep you have managed to dive, pint by beautiful pint.

In this instance, we were talking in the town of Negril, one of the most westerly points in Jamaica, and it survives almost entirely on the tourist trade. A quick trip down to Seven-Mile Beach gives you access to a glorious string of open-air bars looking out to the sea, most of them pretty much identical. As a tourist-based economy with virtually everywhere keeping at least some Red Stripe on hand, it would be terrible manners to simply pick the goddamn Margaritaville and spend your time with the unadventurous bastards camped out there, drinking all manner of blended daiquiris with five pounds of fruit garnish jammed in them. As Pat the ex-pat said “If you want to drink like the locals, order JB overproof rum.” More than one friendly bartender confirmed that the frozen more-fruit-than-booze concoctions are pretty much reserved for tourists, and a JB and Ting (the original grapefruit variety works well) or JB and cola will both set you apart and set you reeling in no time. It’s 126-proof nature definitely helps get the ball rolling in a hurry. Actually, every bartender I encountered was more than willing to indulge my questions and a few even remembered me and my preferred poisons on my second day back.

If you do find yourself in Maragritaville (I had to, if only to meet some travelling companions whose I taste I will forever question), take a good look around: this is not your tribe. Keep walking, hit the beach, and experience the joys of practicing the 3 R’s while ankle-deep in the surf: Red Stripe, Rum, and Repeat. You will only be there for a short time, so spread the goodwill to as many bars as you can possibly reach. Also, tip well–nobody likes a stingy drunk, and your cheapness makes the rest of us look bad. I’m not out here spreading the good word about the fine readers of MDM and The Brutal Hammer just to have you go out there and cock it up. If you get the vibe that your presence is not exactly welcome, have the decency to close out, tip as best you can, thank the staff, and move on.

As a final word of caution, I am not sure whether ordering Captain Morgan is a good idea. I saw it around, but the actual Henry Morgan had a serious reputation for murder and pillaging, so that might be in poor taste. And if you want to get a recommendation for an off-the-beaten path dive, have the decency not to ask other bartenders–if it wouldn’t fly at your local, don’t assume it will fly elsewhere. Ask a cab driver if there’s anywhere nearby that doesn’t get a ton of the regular tourist traffic. Sure, they might have cut deals with certain bars, but at least you can say that you had the gumption to strike out into the unknown and get a taste of what the rest of the world has to offer.

Just get out of the hotel bars every once in a while, find a quiet joint, and proudly inform them that you are not their usual casual traveler: you are a goddamn legend.

Next up: why tequila and cliff diving ought to be enjoyed separately.

As an aside, Jamaica has an excellent literary heritage, so check out this list if you need to pick up a good read exploring the crises of culture and the complicated relationship between Jamaica today and its turbulent history. There are few better ways to spend an afternoon than with a solid book and a couple of beers in the sand.