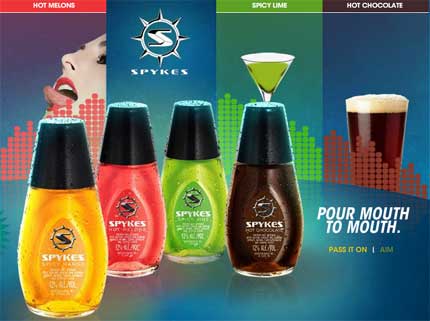 Eight years ago this month Anheuser-Busch stopped selling Spykes, the weird little flavored malt that could be done as a shot or poured into a beer. Spykes was sold in colorful 2-ounce containers and came in flavors like mango and lime, mixed with a jolt of caffeine and ginseng. Critics screamed that A-B was targeting underage drinkers — the containers were said to appeal to teenage girls because they looked like nail polish — but the real cause of Spykes’ demise was that few people bought it, underage or not.

Spykes was the brainchild of August Busch IV, millionaire-playboy and, in 2007, newly-installed CEO of the beer behemoth. Less than a year later the Fourth (as he was called) would watch helplessly as InBev swallowed up A-B in a hostile takeover. Spykes was one of a number of gimmicks the Fourth tried to prevent that from happening.

We have the Fourth to thank for A-B’s talking frog and “Wazzup?” ad campaigns, developed when he was head of marketing before becoming CEO. Later he negotiated A-B’s takeover of Rolling Rock. He developed a reputation as someone who understood the under-30 booze market.

Spykes launched in January, 2007 under the slogan “whatever you want it to be.” Between the ginseng, caffeine, and “natural” flavors, it seems like Spykes was designed to throw every going trend at the wall and see if something stuck. But the only attention it attracted came from nannies in their never-ending crusade to protect “youth.” In May of 2007, a mere 5 months after Spykes debuted, A-B decided to stop production.

In truth there is little to lament in Spykes’ failure. At only 12% alcohol it wasn’t much of a shot. Probably it improved the taste of A-B’s beer, but not so much as to be worth the cost ($1 each) or trouble of pouring  into a bottle.  Spykes proved to be a mere footnote in the annals of hoochology, but it is an interesting one.