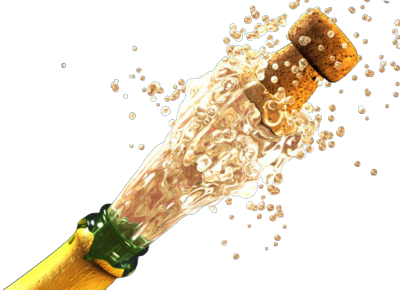 Surviving Prohibition, a sex scandal, and a family feud of almost unbelievable viciousness, Korbel today is the top-selling brand of sparkling wine in the United States. If someone pops open a bottle of bubbly at a holiday gathering you’re attending over the next month, odds are that bottle will be cheap, surprisingly decent Korbel.

Korbel Champagne Cellars was founded in 1880 by three Czech brothers, immigrants who set up shop in the now-famous Russian River Valley of Sonoma County, California. The Korbel brothers’ dream was to produce French-quality champagne in America, and they got off to a good start, moving 30,000 gallons of wine annually beginning in 1882. Unfortunately their dream was crushed by Prohibition, and the Korbel family sold the seemingly-worthless winery to a Californian named Adolph Heck. This proved to be a wise investment by Adolph.

Korbel really took off under the management of Adolph’s son, Gary Heck, reportedly a cold-eyed businessman who devotes his life to his winery. He increased sales from 150,000 cases annually to over 1.2 million after taking over in 1974.

Part of Korbel’s success is due to a quirk of U.S. law that permits venerable wineries to call their sparkling wine “California Champagne” — much to the disgust of French winemakers in the Champagne region of France. Korbel also invested in TV advertising that made it a household name. The long-running ads featured vignettes of parties, weddings and the like, brought to a screeching halt when an unseen voice cries out “The champagne’s not Korbel!”

Trouble in paradise erupted a decade ago, a soap opera-worthy drama that was vividly reported by the San Francisco Chronicle. Gary Heck’s daughter, Richie Ann, participated in a foursome with her then-boyfriend and two young female employees of the winery, that took place in the wine bottle-shaped swimming pool on the winery grounds. Next day, the two young women accused the couple of rape. Ultimately the Sonoma County sheriff decided not to file rape charges — who knows whether or what strings were pulled — but Gary fired his daughter from her job at the winery and expelled her from the property.

Shunned by her father, Richie Ann claimed to be destitute, unable even to pay her cell-phone bill. She sued him for $24 million, money she claimed Gary was unjustly witholding from her, and launched a merciless war of words against the “short, fat, bald Nazi alcoholic,” as she described her father to the Chronicle. When Richie Ann posted a picture on MySpace of a cat pointing a gun, captioned “Here Gary Gary Gary… I got you Mutha fucka,” her father obtained a restraining order against her.

Peace was restored in 2009, under undisclosed terms, except that both Gary and Richie Ann agreed to drop all claims against each other. So far as anyone knows, father and daughter are thoroughly estranged. Richie Ann’s only regret about the whole thing, she told the newspaper, was that she couldn’t have Gary “removed” as her father.

But Korbel rolls on, well-regarded by the experts at its price, and still a staple of weddings and holiday feasts. Maybe headline-making family scandals, rather than damaging an old brand, lent it a little glamor instead.