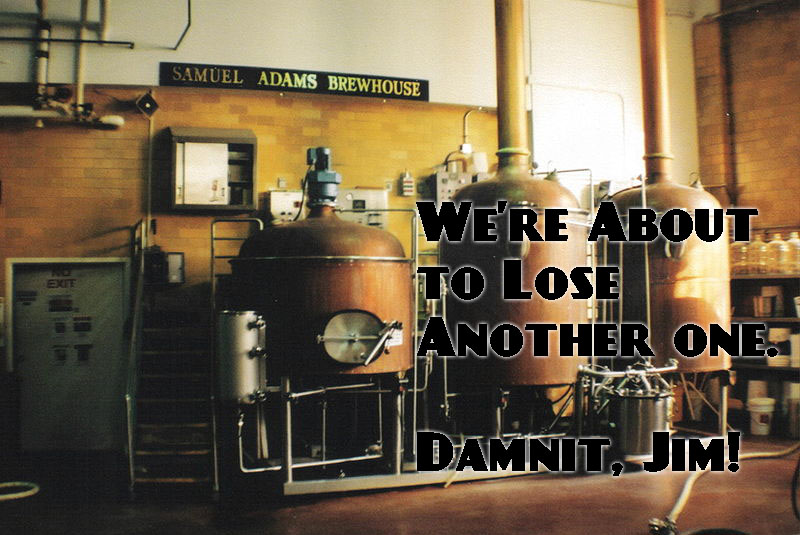 I try to stay out of political discussions unless I’m on a Schlitz-kick in a dimly-lit dive and some knob starts spouting off about “the real problem with America these days.” However, there come times when I, while (mostly) sober, feel compelled to weigh in on an important issue. And yes, it’s about taxes and the effect of money on politics. And beer. And a silly little man in ill-fitting pants. And some slurs against the Dutch.

The big news is that Jim Koch, the chairman of the Boston Beer Company, has announced that he is likely going to be the last American owner of the company. Mr. Koch went all the way to Washington to whine before the Senate about how our corporate tax structure is “broken,” and that it would be better business sense to sell the company to foreign interests and move the headquarters overseas than to pay the taxes that he faces operating in these United States. Here are his two-faced words:

We don’t mind paying our taxes here in the US in gratitude for the opportunities that exist in this country and that I certainly have enjoyed — but don’t mistake that for good financial decision-making,” Koch said to the Senate Permanent Subcommittee on Investigations. “Because of our broken corporate tax system, I can honestly predict that I will likely be the last American owner of Boston Beer Company.

His solution: they’ll have to sell to foreign interests in order to base the company in a country that doesn’t take so much of their precious, precious income. The precious, precious income of a company worth $2.9 billion dollars that has shown a steady overall growth in profit margins for at least the past twelve years. But we’ll return to that point. Funny thing about that $2.9 billion price tag: the entire country of Lesotho could work for a full year and still not be able to afford it. Hell, Belize and St. Lucia would have to go halfsies on it and they would still  just be able to cut the check.

Here is what is inexcusably wrong with Jim’s childish statement (which has been sent to him/his secretary/whatever sad intern handles these kinds of things for comment):

First, Jim, you aren’t paying your taxes “in gratitude”–they’re how shit gets done around here so that we can all have roads and schools and public works and healthcare to keep dear old Grandma from dying from exhaustion in the fields behind a plow because, damnit, the crops just haven’t been coming in like they used to. You aren’t owed some kind of thanks for paying your taxes like its a tribute to how much you like those “opportunities” (by which I have to assume you mean basic infrastructure, police forces, public education, etc.). “Paying your taxes” is precisely within the definition of “good financial decision-making.” You sound like the same kind of tax-avoiding riff-raff that counts Martha Stewart, Wesley Snipes, Heidi Fleiss, and Al Capone among their “good financial-decision making” ranks.

Second, Jim, I’m sure you know that taxes are a necessary, if not frustrating and complicated, part of our society. I’ve written on this matter before, but it bears repeating. Before we even had the ability to write enticing little labels on a bottle of beer, we had a way to record the sale and transport of it. Brewing predates writing in the historical record across all advanced civilizations. Hell, beer just might be the reason we have taxes in the first place. Surely you want to take your business and use its success to make a better Boston, a better Massachusetts, a better America. Dodging taxes by selling to a foreign buyer and moving the headquarters (even if it is largely just on paper) overseas is disgraceful.

Third, you’ve shown some serious growth over the past few years, judging by the company’s net worth (approaching $3 billion), the overall increase in profit margins, and the massive growth in profits over this time last year (a quarterly profit of $13.7 million compared to the $8.3 million from this time last year! Well done. I found $5 in a parking lot the other day, and I thought that was pretty good, but those are some impressive numbers. My move, I guess). That, and the fact that your profit margins have shown steady growth since at least 1993. Looking at the margins from Q1 2003 to Q1 2009, You had three rough quarters out of 25 where you slipped into the negatives, and only one good quarter where you broke the double-digit barrier. However, from Q2 2009 to Q2 2015 you posted nothing but positive margins, and with a whopping 13 out of 25 quarters posting in the double digits. That looks a lot like success, and a lot like you aren’t really hurting under our current tax codes. The only thing I have that has grown so much over that period is the pile of empties and my sense of self-loathing. Seems like you’re doing just fine.

Fourth, what the hell? You’re The Boston Beer Company. I lived in Boston for a spell, and I visited your brewery. It was a lovely afternoon with a lovely woman and some lovely beers. Sure, you make Boston Lager in Cincinnati, but isn’t that enough of a move? You have done great work helping to launch the craft beer revolution in this country, so why in the name of Bacchus do you want to jump ship now in order to save on taxes? Especially because that will only shift the tax burden down to us regular folks, the regular folks who drink your beer. When a government can’t get enough money in one way, they find other ways to rake it in. After leaving Boston, I ended up in Montana–we have no sales tax (which usually helps fill the State’s coffers) so we have a high alcohol import tax (11th highest in the nation, as it appears). It taught me that the state will always shift the burden somewhere, and that usually means shifting it to the common people. You’re close with legislators. What do you think they will do if you leave? They’ll make things worse for the rest of us.

If you want praise for paying your taxes, keep that in mind. You can afford to pay them. The rest of us are struggling enough. We don’t need to collectively shoulder the burden that you can already carry (and carry well, from what the numbers suggest) just because you want to make more money. Why not be a force for the good of your country and not just for the good of yourself and your shareholders? I like your beer, but not if it turns its back on my countrymen.

If I’m missing something, help me to understand. Otherwise, I’m available as an adviser for a nominal fee.

I do like Sam Adams, and I’d hate to see a pioneer in the craft market sell out so profanely. But Jim Koch is getting dangerously close to getting onto my Shit List–a list previously occupied by only Jon Taffer and the Dutch.

Fuck the Dutch. Seriously, what have they brought to the table since van Gogh, Bosch, Escher, and Spinoza? Other than jenever, that is. Because that’s delicious.

Fine–the Dutch are alright, I guess. But Jim still has to watch it.