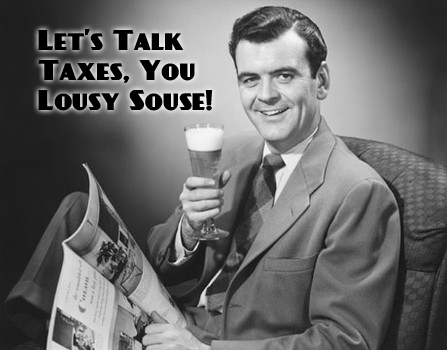 If you are reading this in the States, then you know that today is the financial equivalent of the morning after settling up a very confusing, very long, and very blurry bar tab, the bulk of which you barely remember and the math behind it barely within your abilities to comprehend. It is the day after tax day, and that means both a bit of bitching and a bit of history, which is rather like bitching since they both try to elucidate how things became so effed and who is to blame, but history is usually done by people in bow ties.

Which brings up a thought for the gentlemen drunkards out there: drinking with neckties is classy, but they have a habit of dropping into your drink and making you look like a disheveled dipsomaniac, but bow ties are always cool about it–they just stay put, stay out of your business, and keep you looking dapper. Matt Smith might just be right on this one. As for you non-bow-tie-wearing ladies or just really fashion-bending gents with extremely thick necks, you’ve got cloches and church derby hats at your disposal. Use them wisely.

So, back to taxes. We all know that the discovery of spontaneous fermentation was the catalyst for our nomadic ancestors to settle down and form permanent settlements, compelling us to develop agriculture and set the stage for society-writ-large that we enjoy to this day. Early beers were a valuable commodity, and as soon as we had trade, some ass decided that taxes were a good idea. With the growth of permanent settlements and the correlative increase in trade amongst them, it became necessary to have a system to record all of it. Thus the trade of valuable commodities (early forms of beer being prized among them) necessitated the invention of written records. If you look at the timelines between the conscious production of hooch versus the invention of written language across the globe, it is clear that the booze came first. Take Sumeria–the earliest evidence suggests that they developed a specific pictograph for beer at least as early as 4000 BCE:

The first documentary evidence of alcoholic beverages was written in Sumerian around 3200 BC, most certainly concerns beer rather than wine production and employs a specific pictograph for beer itself – an outline of a clay vessel marked with short, diagonal lines. The clarity of such picotographs indicates that beer was, by this time, commonplace and that the brewing process had been developed at a considerably earlier period in Mesopotamia. (Stamp seals with a similar pictograph have been dated back to 4000 BC).

Compare that against the consensus on the invention of written language (in which symbols are used to denote both sounds and intangibles rather than just pictographs of physical things) in Sumeria around 3200 BCE. The same be can be said of the (probably) independent inventions of written language in China (compare fermented beverages from around 7000 BCE against written language from around 2000 BCE), and the other earliest known written language, which was from mesoamerica (fermented cacao beverages dating to before 1000 BCE versus written records from somewhere between 500-600 BCE).

Trade seems to be the catalyst for the invention of language in all cases, and Sweet Lady Alcohol was certainly a large part of that. Think about it–only the places where they had a glut of basic necessities (like livestock and food and materials for textiles) would profit from the trade in those items, but the production of early alcoholic beverages would be accessible to most peoples and certainly profitable. Trade, and subsequently taxes, appear to be based on the fact that drinking is just great, and it predicates our entire idea of civilization. That alone makes tax day a little more bearable while you try to make sense of the byzantine rules for deductions, tax rates, write-offs, credits, etc.

Hell, part of the reason that I am even able to write this and that you are able to read this is because alcohol had a substantial part to play in the creation of the written word. That makes MDM and The Brutal Hammer the greatest homage to their shared tradition that the world has ever known. If you haven’t already raised a glass to that bold truth, then do it right now. I’ll wait. Go on–git. We’re pushing society forward one long, sweet sip at a time just as our ancestors did. Cheers, you beautiful bastards, and thank you for being along for the ride.

However, if the Creature had a role in the play in the horribly obtuse reality that is our modern tax code, then I just don’t know whom to blame. In this country, we have a history of taxing alcohol to pay for war debts, and we’ve had a significant and just plain good old-fashioned ‘murican armed rebellion over that fact. We like our booze, we hate our taxes. The two are historically, economically, and inextricably intertwined.

At present, I live in a state with no sales tax but which still has the 11th highest excise tax per gallon on distilled spirits. There is no escaping the spectre of taxation, and certainly no way to divorce the idea of taxes from what it means to live within the structures that civilization makes available to us. Taxes pay for our roads, our bridges, some of our scientific research, parts of our healthcare system, our libraries…if it’s infrastructure, it’s paid for by taxes. And if they’re taxing it, then the more we drink the better funded these programs become.

Here’s a quick thought experiment: Buying a fifth? That means a child gets to read some more about the adventures of Curious George (and, incidentally, the pitfalls of illegal animal ownership)! Need a beer? BAM–you just helped a kid get to school on publicly-funded roads and learn that their interest in the Humanities is itself a road to financial ruin! Want to pick up a bottle of the bubbly to celebrate some big event? ZAP–you just invested in the future of our roadways. That makes us a valuable vertebrae in the backbone of the country, and we should be proud of that fact. We’re drinking our way to a better tomorrow–for all of us.

We all know this, and we all need this. What some may not know is that the whole tax system came about (at least in part) from how valuable a stiff drink is to each and every one of us from time immemorial, and how that has been true since before we even had a way to write about it in order to tell you how true it is.

Kind of makes you want to grab a bow tie, doesn’t it?