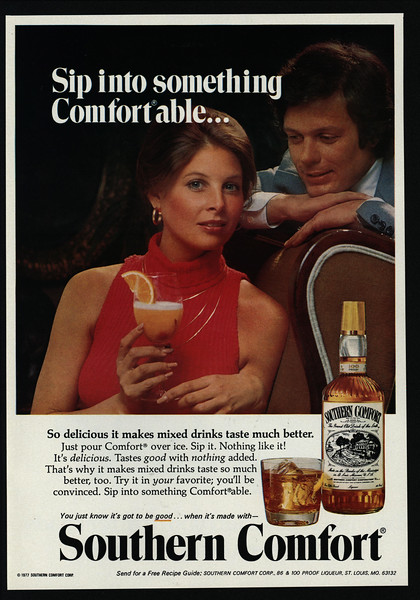 Maybe you remember that unflattering nickname for Southern Comfort, the booze of wayward and misinformed youth.  Or maybe you’ve tried to forget that SoCo ever existed.  It’s still around, but SoCo hasn’t been popular outside of frat houses for a long time.  Now under new ownership, the fruity liqueur is scheduled for a relaunch in July — this time with actual whiskey as a key ingredient.

SoCo used to be whiskey-based, back when it first started out in the 1800s.  It was rotgut whiskey, cooked up in frontier outposts and shipped down the Mississippi River.  In 1874, a New Orleans saloon keeper named Martin Heron got the idea to spice up the swill he was receiving to make it taste like cognac, the preferred tipple of his Frenchified customers.

Whatever Heron was adding to the whiskey (SoCo’s exact ingredients are top secret) it was good enough to keep him in business.  Southern Comfort, as the recipe came to be called, passed through the hands of multiple owners and re-emerged after Prohibition.  It got a lot of mileage out of claiming to be the “Grand Old Drink of the South,” and there was a movie tie-in to the release of Gone With the Wind, a SoCo-based cocktail called The Scarlett O’Hara.

SoCo’s heyday was the 1960s when Janis Joplin adopted it as her booze of choice (once famously beating Jim Morrison over the head with a SoCo empty) and her fans followed suit.  But Joplin died in 1970, and then SoCo sold out to booze conglomerate Brown-Forman.  Somewhere down the line, whatever whiskey was still left in the SoCo formula was replaced by neutral grain spirit, and it hasn’t been the same since.

Enter Sazerac Company, the New Orleans-based liquor company that bought SoCo from Brown-Forman just last year.  Sazerac has big plans to revive the brand.  There will be a repackaging, and various flavored versions (vile-sounding potions like Lime Comfort and Cherry Comfort) will be retired.

Most important of all, as Sazerac honchoes told the New York Times, will be the return of whiskey:

Sazerac thinks that the drink’s future depends on consumers’ thinking “whiskey” and not “liqueur” when they buy or order it. “For us, whiskey is the root of the brand and we’re going to embrace that, and not play in that liqueur space,” Mr. Richards said.

Sazerac has even played a subtle mind game in giving the 80-proof version a black label, a color favored by another famous whiskey. “If we’re right between Jack Daniel’s and Jim Beam on the shelf,” Mr. Brown said, “that will be fine with us.”

Good luck with that.  Once you’re labeled Sudden Discomfort it’s hard to go back.  At least returning SoCo to its whiskey roots is a step in the right direction.