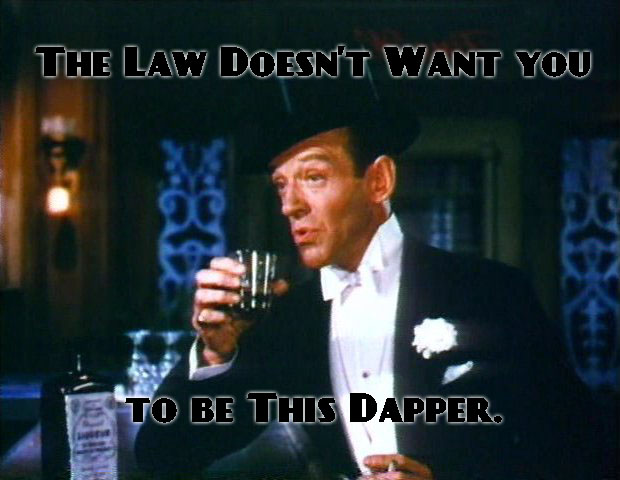 Don’t you just love when science lets you take a supremely unpopular opinion (like how the Earth actually revolves around the SUN! Imagine!) and be backed by the full force of being right? Well, follow me on this little treatise as to why the all-too popular total ban on smoking in bars in the name of “public health” is probably missing some potentially life-saving information. That’s right–I’m bringing down the Hammer on the smoking bans with some G-dang science as to why smoking just might prevent things like drunk driving, alcohol poisoning, and the dangers of looking and acting like Pauly D from The Jersey Shore.

Clearly, any advocacy for smoking is going to be unkindly received, but the good thing is that I am incapable of caring about that. This is not an argument that smoking is good or even neutral to your health–this is an argument that nicotine can actually, for some of us more serious devotees to the Creature, make us less of a “danger” to the worrisome masses that huddle around their wine spritzers and plan for a cab home a week in advance of a one-mimosa brunch with their “besties.” The facts, as they seem to be, is that nicotine can lower blood alcohol concentration, and that means two different things to two different groups of people: first, to the teetotalers and the worry-worts it means that those brave and graven souls among us who enjoy a few cigarettes with our drinks are actually less impaired and more functional than one would suppose from the number of empties around us; and second, to those of us who think of whiskey and cigarettes as two basic food groups, one of them is slowing us the fuck down.

A study published in the prestigious science journal Nature showed that of rats given a hearty dose of booze followed by varying levels of nicotine, those rats given nicotine levels mimicking “moderate” to “heavy” smoking in adult humans showed a 30% and 50% drop in BAC levels respectively. [If you have to ask why the results in rats are significant, then you simply do not understand how science works. I cannot help you, but I can implore you to trust them and me on this one. This is important.] The leading theory seems to be that nicotine slows the rate at which the stomach empties, allowing more time for booze to be subjected to stomach acid and broken down, thereby slowing absorption rates. Now, this is where things get interesting.

No matter where you are, you probably have noticed that there has been a wave of smoking bans in public places of all kinds, and the reasoning is inevitably based on concerns about second-hand smoke. Those concerns might be all well and good for indoor spaces (like nurseries, dentists’ offices, tissue labs), but many bans have been reaching out even to designated outdoor smoking sections of bars and restaurants: spaces populated solely by people who smoke and those who just don’t mind it. Sovereign spaces. Sacred spaces.

In the USA, many states do not have state-wide bans but still allow local governments to establish bans if they so choose. Take a look at that Wikipedia list linked above–for every locality that enforces stricter bans than those set by the state, nearly every list includes bars among prohibited spots, allowing for smoking in either designated rooms or outside. However, places like Bar Harbor, Maine (one of my favorite places), are trying to extend the ban to even bar patios. Even one of our last great Bacchanalian sanctuaries, New Orleans (another of my favorite places, coincidentally), is trying to outright ban smoking in bars and casinos. This is a town that still allows us to be, in the words of the great FKR, fully emancipated adults by being able to have an open container out on the streets. It’s one of the few places left in America that still does, one on a list of the glorious few that includes the illustrious home of both Evel Knieval and the world’s largest contaminated open water source: Butte, Montana. But Butte is terrible, so allowing us to drink everywhere there is just a way to soften the blow that you’re stuck in a town that’s one letter away from being a synonym for an anus.

Here is where I take issue with complete smoking bans in bars, and why you should too: the science indicates that the presence of nicotine can reduce the BAC level of someone who enjoys both, which combined with the tendency for smokers to also be drinkers (either causally or coincidentally) means that giving a goddamn adult who wants to do both a space to do so is actually a move to protect the sacred cow that is “the public health interest” by allowing them to lower their own BAC faster than even the steady hand of time can do on its own. Own a bar and want some of your more lucrative patrons to sober up a bit more? Then let them have a place to have a smoke if they want to. If they have no where to light up after a few drinks, guess where they’re going to go? They’ll have to drive off somewhere just to be able to smoke in their cars. How is the logic here escaping anyone?

If you want to defer to the prevailing pro-nanny-state opinions of the 58% of Americans who support smoking bans (including about 24% who want to make smoking illegal entirely), consider this: about 42% of Americans still think that humans were created in their present form within the past 10,000 years. And yes, those were both recent Gallup surveys, so we can consider them comparable data sets with similar methodologies. Crowd-sourcing is probably not the way you want to go on a science-based argument, which I should hope is clear. What is clear is that total smoking bans are, in effect, ignoring the age-old tradition of self-regulation that is someone having a drink and a smoke, enjoying their all-too-few free hours quietly, and keeping themselves from turning into a Jäger-ripping loudmouth who is likely to plow into your precious Celica come closing time.