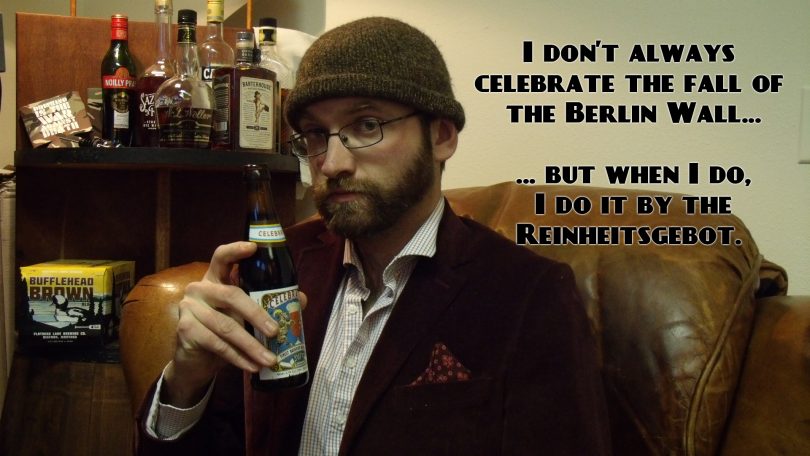 Next to the sweet minx that is Lady Alcohol, we Hammers love something with the zeal and earnestness normally seen only in frat boys attempting to break their own keg-stand record; what I’m talking about here is that little mistress called Liberty. We love it so much that we can get rather impassioned in its defense at times. We don’t like being told how to act, what we can and cannot purchase on certain days, or that “this is a children’s museum and you can’t do that here” because I know that, officer, but this Wild-I is coming back out right now one way or another. The point is, liberty is a constant struggle against those in positions of power who believe that they know what is best for the rest of us and who would deny us the basic right of self-actualization that is imbued in all of us.

Today is a great day to remember that, when the common people stand against tyranny with just a little bit of luck, they can throw off their shackles and enter a better, brighter world. Today marks the 26th anniversary of when the Berlin wall fell, which apparently led to a whole lot of spontaneous champagne drinking in the streets. That puts it in the running for “largest group toast in history,” which is something the textbooks seem to leave out. A remembrance event is planned to commemorate both the uniting of East- and West-Berlin, but it will also honor the victims of the horrific violence that happened on the same day in 1938: Kristallnacht–the atrocities committed against German Jews as part of Hitler’s detestable pogrom of vengeance, that is, and not the night you drank a bottle of Cristal and thought you were Nas (you little verbal assassin, you).

Anyways, raise a glass to this triumph of liberty over oppression and feel some love for our German brothers and sisters. Personally, I tracked down some of Ayinger’s Celebrator to mark the occasion, because the Germans gave us something beautiful way back in 1516–the Reinheitsgebot–which was drafted in Bavaria, the same damn place where the Ayinger brewery stands. If you haven’t heard of it, you may know it as the German Purity Laws, and they couldn’t be simpler in their treatment of the brewing of beer:

Furthermore, we wish to emphasize that in future in all cities, markets and in the country, the only ingredients used for the brewing of beer must be Barley, Hops and Water. Whosoever knowingly disregards or transgresses upon this ordinance, shall be punished by the Court authorities’ confiscating such barrels of beer, without fail.

There’s a beauty, an elegance, in the simplicity. You either make magic happen with three ingredients, or you just don’t bother. Now that the market is flooded with pumpkin beers for the fall and winter (more than 1,100 by this count), and with new flavored/infused/summoned-from-the-twisted-mind-of-our-dark-lord-Baal concoctions from microbrewers everywhere hitting the shelves daily, there is something honest and refreshing about a beer that just nails it with only those three ingredients. Way to go, Germans!

Of course, the whole “do it this way or we’ll confiscate it” vibe of the Reinheitsgebot is a little fascistic, but the Germans are a complicated people.

As another little nod of appreciation, you should read this fine piece from NPR on a German family that has weathered the whole east/west divide and the drastic changes that followed the fall of the Berlin Wall to keep on making their schnapps, Berliner Luft. Long may they distill.

And Lucas, if you’re reading, here’s some Goethe in your honor: