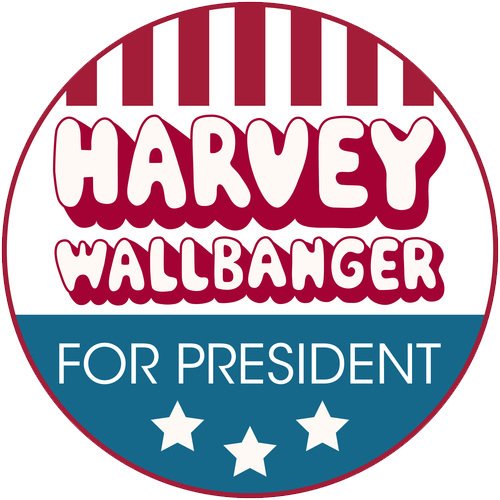 November 8th is election day, which is reason enough to get hammered. It also happens to be the official “National Harvey Wallbanger Day,” in celebration of a fad cocktail from the 1970s that nobody drinks anymore. But back in the leisure suit era this strange glowing mixture was America’s drink of choice, and even made an appearance in electoral politics.

If the stories are true (and they may not be) the Harvey Wallbanger was named after a California surfer dude named Tom Harvey. In the 1960s Harvey lived the Beach Boys lifestyle, surfing all day and hanging out in bars at night. His favorite drink was the ordinary Screwdriver spiked with a shot of an obscure Italian liqueur called Galliano, which made the drink even sweeter and gave it a psychedelic glow. After a few of these Harvey started staggering around the bar crashing into the walls, and a cocktail legend was born.

The Harvey picked up a following in California but didn’t really take off until TWA started offering Harvey Wallbangers on flights. The Galliano people, awakening to the realization that there was some actual demand for their product, started promoting the Harvey Wallbanger to the best of their modest abilities. They came up with a cartoon personification of the drink, a big-footed, sandal-wearing surfer whose slogan was, “My name is Harvey, and I can be made!”

Harvey’s image started showing up on t-shirts and in a party game conjured up by Galliano’s marketing team, in which the object was to slam into the wall. For the 1972 presidential election (held on Nov. 8th) Galliano hyped a “Harvey Wallbanger For President” campaign and handed out presidential buttons, bumper stickers and the like. Harvey actually garnered a few thousand write-in votes, the best showing ever by a cocktail party.

Harveys became a staple in fern bars, another relic of the 1970s. Fern bars were decorated with greenery, wood paneling and Tiffany lamps, designed to be the total opposite of the traditional dark and smoky saloon. The fern bar was meant to be inviting to single women and anybody else intimidated by the usual bar setting. Their drink specialties were wine spritzers and simple, sweet cocktails. The Harvey Wallbanger fit right in.

Harvey had a nice run, but eventually went the way of the fern bar, pet rocks and the discotheque. Reportedly, Harvey Wallbangers have recently made a comeback of sorts, rediscovered by hipster-types. Galliano now has a different recipe, more herbaceous and less sweet, so the Harveys of today are not as cloying as they used to be. The old neon glow is still there, though. If there was ever a day to bring this disco-era dinosaur out for one more dance, November 8th would be it.

Updated 25 October: Artist Bill Young, who created the Harvey Wallbanger character and did much to make the drink famous, died last week. The article linked here chronicles Mr. Young’s connection to the drink and has some samples of his work. Peace to his memory.