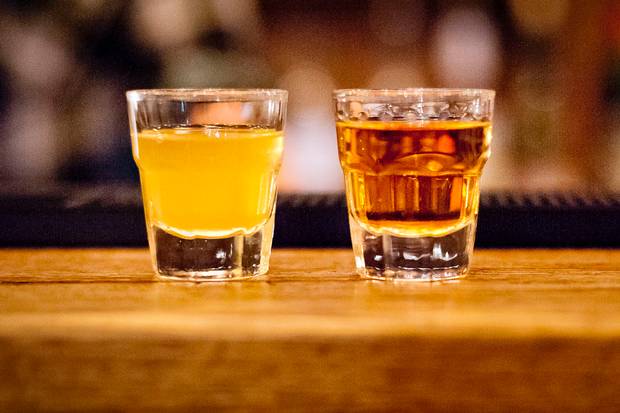 It’s been a decade since the appearance of the so-called Pickleback, the shot combo of bad bourbon and pickle juice that later became a cult hit. Though its fame isn’t what it used to be, the Pickleback still has a place in the drunkard’s arsenal.

The Pickleback is not exactly a modern invention. Booze and brine have been a natural pairing for ages. Pickle juice isn’t a bad hangover remedy; apparently it replenishes electrolytes and restores sodium levels. Something like that. Whatever it does, it helps. Athletes have long known of brine’s restorative powers.

The name “Pickleback” was coined in 2006 by a Brooklyn bartender named Reggie Cunningham. The story goes that Cunningham was approached by a female patron who demanded a shot of Old Crow bourbon and a pickle juice chaser. Cunningham joined her in the shot, and was amazed to discover that the juice neutralized the vile flavor of the Crow. Multiple shots of it also allegedly cured his cold. Cunningham dubbed the tandem the Pickleback and started selling it at the bar, and a legend was born.

Cunningham has since moved on to bigger things (he now raps under the name The Mr. Move). Picklebacks became a bar staple in Brooklyn, eventually spreading across the country, and then overseas when the shot was introduced at the Paris and Moscow Bar Shows. Peak Pickleback fandom was reached in 2010, with a “Pickleback vs. Nickelback” Facebook page (Pickleback won) and a story circulated in gossip magazines that Justin Timberlake tipped a bartender $100 to fetch him brine for Picklebacks.

The Pickleback fad eventually ran its course, though by no means have they disappeared. You can still order a Pickleback at just about any semi-respectable dive.

And, of course, they’re easy enough to make without a bartender’s assistance. If you ever find yourself reduced to drinking Old Crow, or any other bottom shelf swill, Picklebacks can be counted on to ease the transition.