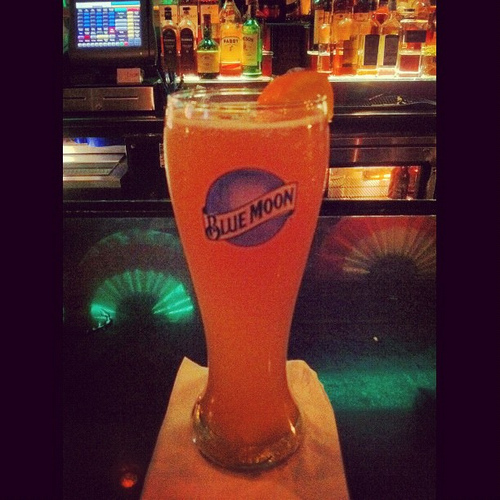 Blue Moon beer celebrated its 20th birthday July 31st — appropriately enough, a date when an actual blue moon arose on the horizon — with rooftop concerts and “moonlight parties” at bars across America. The festivities were only partially eclipsed by a lawsuit that hung over Blue Moon parent company MillerCoors, disputing Blue Moon’s authenticity as a “craft” beer. Turns out, the celebrants need not have worried: a federal judge dismised the suit last month.

Controversial, “artfully crafted,” over-priced, and undeniably tasty — Blue Moon continues to push just about every button and conjures all kinds of mixed emotions.

Blue Moon’s origins go back to the early 1990s, when Coors Brewing Co. sent employee Keith Villa to Belgium to complete his doctorate in brewing science (apparently there is such a thing). Villa returned home afire to create his own Belgian-style beer. In 1995, Coors was convinced to give Villa his shot, and provided him a meager budget to get his shoestring brand rolling.

The “Our Story” section on Blue Moon’s website tells of Villa’s early struggles: personally visiting bars and stores to pitch his strange new beer, even dropping off bags of oranges for bartenders to use as garnish. It’s a feel-good story of a visionary hustling to bring his dream to life. But nowhere on the website does it mention that Coors was behind Villa and Blue Moon (however modestly and hesitantly) from the start.

Thus a man named Evan Parent, a self-described “beer aficionado” and homebrewer from San Diego, sued MillerCoors last April alleging false advertising, claiming he was tricked into overpaying for what he thought was microbrew. Twenty years on seems a bit late in the game for a so-called beer aficionado to suddenly become enlightened about the origins of his beloved favorite brew; but that’s not what convinced the judge to dismiss the case.

Part of the court’s reasoning was that MillerCoors, on its website and in its trademark registration, claims Blue Moon as a member of its family of products. This has never been a deep secret. But more importantly, there is no legal definition of craft beer. The word “craft” as it applies to beer, it seems, is little more than advertising puffery. Shock Top (Anheuser-Busch’s Belgian-style answer to Blue Moon’s success) is craft beer. Hell, Bud Light may as well be called craft in this judge’s generous view.

The Brewer’s Association offers a plausible defintion of craft beer, one that Parent relied on in his suit:

“Produce[s] less than 6 million barrels of beer annually; [is] less than 25 percent owned or controlled by a non-craft brewer; and Make[s] beer using only traditional or innovative brewing ingredients.”

The only problem is that macrobrewers are under no legal obligation to follow that definiition. Until a court or some government body says otherwise, it behooves boozers to stay more informed about their favorite brands than did the oblivious Mr. Parent.