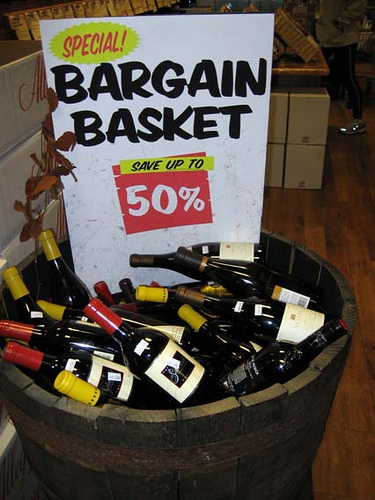 Of the top twenty wine brands sold in the U.S. last year, all but a few were brands that go for less than $10 a bottle. I say: Good job, America. Only a snob would deny that most of the cheap stuff being produced nowadays is at least well-made, and sometimes very good.

The number one seller in 2015, as calculated by Wine & Vines magazine, was Barefoot Cellars, formerly an independent operation and now a part of the Gallo Empire. Barefoot is non-vintage (like all bargain juice is) in order to be consistent from place to place and year to year. You could call that bland; but the wines have no obvious flaws, and not everybody likes surprises. The average national price of a bottle of Barefoot, according to the magazine, is a mere $5.74.

Number two on the list is Sutter Home, the Napa winemaker famous for handing the world the dubious gift of white zinfandel forty years ago. If sweet is your thing, in the white zin style or not, nobody does it better at the price (average $5.25) than them.

Third-best seller last year was Franzia box wine, which tells you that a lot of old people and college kids buy wine. It’s easy to laugh at Franzia, and the alcohol content of some of their products is low for a drunkard’s requirements. On the other hand, at an average cost of $2.17 for the equivalent of a bottle it’s tough to complain.

Some other notable cheapos in the top 20 are Carlo Rossi box wine, Yellow Tail, and Rex Goliath. Carlo I’ve praised before as good value for the 5-liter volume. Australian-made Yellow Tail is the best-selling import and has been for years. It’s a lot like Barefoot, and not just because both have cutesy cartoon labels: Both are generically consistent, simple, well-designed, and priced wino-friendly at $5-$6 a bottle. Rex Goliath, I’ll say right now, produces the best pinot under $10 I’ve ever tried.

It’s been said before now that this is the Golden Age of cheap wine. Modern methods of production, marketplace competition, and customer refusal to settle for crap have obliged even the Franzias of the world to raise their bottom-shelf wine game. You might lose a $10 gamble on a bottle that doesn’t suit your tastes for whatever reason. It’s a lot harder these days to get taken by a bottle that’s downright bad.