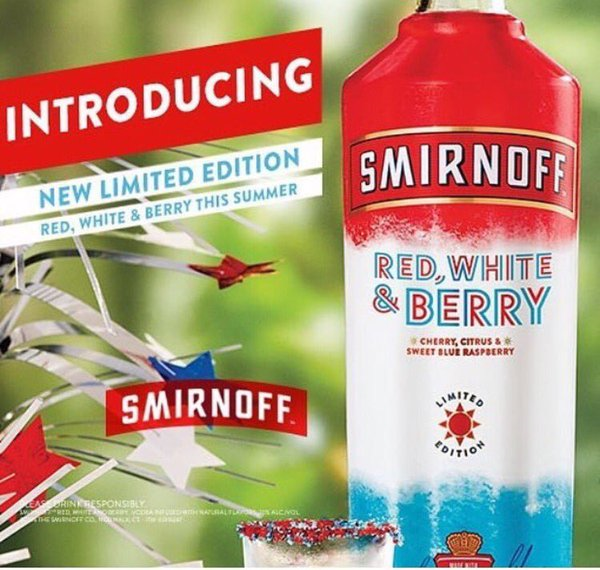 Once the “vodka of the tsars,” Smirnoff Vodka — owned by a British company — has suddenly caught American patriotic fever. Behold Smirnoff “Red, White & Berry,” billed as “the Official Vodka of Freedom,” launched on Memorial Day and apparently sticking around at least through summer:

Delivering a blast of summer fun, this limited edition vodka specialty is a ridiculously delicious mix of cherry, citrus and blue raspberry flavors, and is perfectly enjoyed as a shot or mixed in your favorite summer cocktails—or even adult frozen treats! SMIRNOFF™ Red, White & Berry is decorated in the season’s best colors and captures the All-American spirit. It’s the ultimate party accessory for responsible drinking during patriotic summer occasions and is something we can all agree on this election season.

A crass marketing ploy, you say? Well, yeah, it is. But it makes more sense than might appear at first glance.

It was America that saved Smirnoff from the black hole of Russian Communism, as told in the pages of Modern Drunkard Magazine. Smirnov brand vodka was a favorite of the tsars, but not so much of the Bolsheviks, who shut down the Smirnov operation after taking power. Vladimir Smirnov, keeper of the company flame, passed his secret vodka recipe on to an expatriate Russian businessman named Rudolph Kunett. Mr. Kunett took the recipe to the US and in 1933 revived the spirit under the slightly-modified name “Smirnoff.”

Few Americans were vodka drinkers back then, and Kunett’s Smirnoff venture didn’t make much headway at first. Later he brought in a partner named John Martin, who had already made his fortune selling A-1 Steak Sauce. Under Martin’s direction Smirnoff gained its footing, perhaps helped by the US-Russia alliance in World War II.

Smirnoff really took off with the invention of the famous Moscow Mule cocktail (which Martin seems to have had a hand in). The popularity of the Moscow Mule made Smirnoff, practically the only vodka available in the US at the time, an essential purchase in the burgeoning Cocktail Age of the 1950s.

In 1962, James Bond first ordered a vodka martini “shaken not stirred” in the film Dr. No. Smirnoff was 007’s booze of choice, and from then on martini drinkers switched from gin-based to vodka-based cocktails. Smirnoff sales soared beyond anyone’s wildest dreams. It’s still, by far, the best-selling vodka in America today.

And Smirnoff is a real immigrant success story, arriving on these shores with nothing and rising up to fulfill the American Dream. If it wants to do a little flag-waving to drum up sales this summer, I give it a pass.