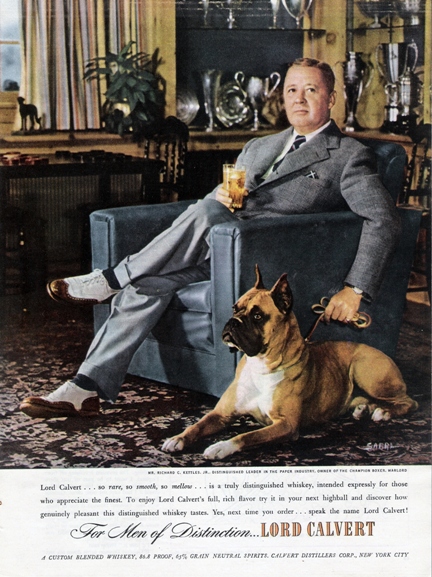 I’ll leave the good stuff to Mr. Dylan Jesse. Being a man of modest means, and very thirsty, the best I can do is slum on the bottom shelf with the likes of Lord Calvert Canadian Whisky.

In a reminder that Lord C still exists, parent company Luxco has declared summer 2015, in ALL CAPS, the “SUMMER OF THE COW!” Visitors to the Lord’s Facebook page (don’t bother trying to register directly, the link provided in Luxco’s press release does not work) have chances all summer to win barbecue paraphernalia. One lucky winner will be awarded a whole cow, or at least 600 pounds of beef, and a freezer to store it in.

How the mighty Lord has fallen. Lord Calvert used to be considered a premium brand, or tried to be; I remember seeing flashy ads for it like the one pictured here in old issues of Playboy and Sports Afield. Now it’s in the stable of the aforementioned Luxco, a non-distilling producer headquartered, not in Canada, but in St. Louis, Missouri. Luxco is mainly known for peddling Everclear, but lately it’s been adopting orphan brands no one else wants, like Rebel Yell and Ezra Brooks bourbons, and (in 2012) Lord Calvert.

The real Lord Cecil Calvert, Baron Baltimore, seems to have been the founder of Maryland, and his descendants opened a distillery there. He also settled some colonists in Canada, and this tenuous connection was evidently enough for then-owner Seagram’s to justify naming a Canadian whisky after an American guy. Fear not, Lord C is genuine Canadian whisky. It’s aged for “36 months,” another way of saying three years, which is the legal minimum for a whisky to call itself Canadian. It’s distilled in the “heart of Canada,” Luxco assures us, although where exactly that might be is uncertain.

Is this stuff drinkable? By that low threshold, yes. It’ll burn some if you try to take it neat. On the rocks you can taste the rye and an odd sweetness, but the C in Lord C does not stand for Complex. It is unobjectionable in a mixed drink. It’s cheap.