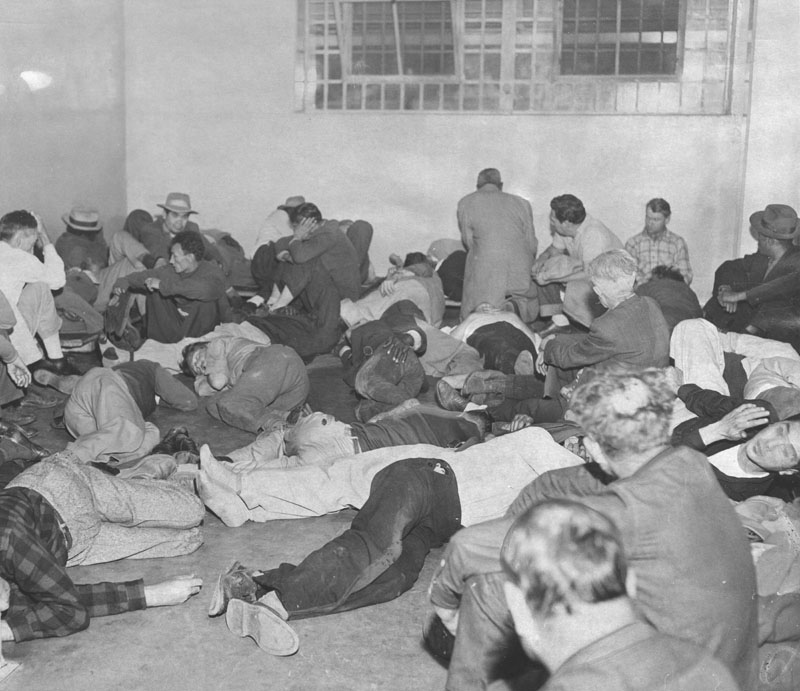 So my boy Burt Mummolo in Tulsa has issued notice to the relevant parties that the government of Oklahoma’s second-largest metropolitan area has some changes in mind for its most intoxicated occupants, a constituency of which I am President in spirit, if not precisely in elected title.

More specifically for the drunkards, these changes are to come in response to those moments when we happen to… lose ourselves… on wayward nights, and fall, hypoxically, into the arms of our urban caretakers. The blackout drunk, where caution’s in the wind, your eyes are in the red, your lips are slimy-slick, and you can’t make another step down this see-saw of a sidewalk without tumbling.

Times like these, drifting away, you find yourself distantly appreciating the safety net you’ve stumbled in, laid out and held taut by providers of the public health, to keep you safe.

Usually you wake up in jail. And it’s not just jail you have to deal with—this hard wakeup is the beginning of your inconvenience, which, with wild variations between counties, cities, and states, will often see you being charged legally, as a criminal, with fines and fees, left with dark marks that will never leave your civic record no matter how much they make you pay. This is the opposite of a safety net—it’s more like tag-and-capture.

That might not be the case, here soon. Not just Tulsa, mind you—depending on how well programs like these may prove to work, we may eventually be talking everywhere.

Tulsa is the city that I live in, which is notable for being featured briefly in the 2009 Jason Reitman film Up in the Air, and also wholesale slaughter in the streets. That wasn’t even a hundred years ago; that street’s about a mile from my house.

I was born here. I often fear I’ll die here. At night I can see the hospital that dragged me into this whole mess from my bedroom window. It’s terrible.

Being in the midwest, I am very rarely at the starting points of creeping social changes in this country. The craft beer movement, here, is still beginning. Y’all don’t know, out on those coasts. Y’all at the front of every damn movement. I had fucking falafel for the first time the other day—falafel! Y’all been eating falafel since day three out on the coasts, I’m sure. Three days old, drinking wheatgrass shots in the morning, and Pliny the Elder at night (RIP). Jesus. I’ve never even smelled a cronut.

Well, it’s Tulsa’s turn to have a movement. My turn. Look what’s coming to town, boys: is it the circus? Hell, nah—it’s the drunk tank!

What we are here referring to, friends, is a public inebriation center, or sobering center. More medical facility than the gulag, these centers, open 24 hours, are meant to accept the drunk and drugged up (re: you, me), should they be found wandering just a little bit too listlessly in the streets, as can happen. But they are not the jail—the police have nothing to do with them. Nor the justice department, nor the county prosecutor. These drunk tanks come from charity—they really are here to keep you safe. How does that not make you smile?

So, sobering centers. These are not new, but they are uncommon, in the common consciousness. Heck, I imagine that a lot of people still imagine that being picked up in America for public intoxication in TYOOL 2016 adds up to little more than a charming, Mayberry-esque encounter that probably includes free breakfast and a bus pass. That shit just ain’t true.

While right now, for Tulsa, this is only a proposal, I do have to say that as a broad national trend, this is unambiguously a good thing. More social services need to be disentangled from the thirty-armed sea serpent that is the American justice system—the sooner, the better, the more, the better. So why not start at the bottom of the barrel, literally in the gutter, with the drunks?

My first impulse is that a trip to a place like this sounds fun in a “stupid, stupid, Sarah” sort of way. I have, in the past, been down for this sort of thing. I mean, look at the literature! These sobering centers don’t cuff you—not as a matter of necessity, at least. These drunk tanks aim to change this game, and it should be noted out of respect that they tend not to particularly prefer the name “drunk tank” in reference to them in the news. It truly does them a disservice. The Oklahoma City facility, operated by the OK Metro Alliance, has seventy-five beds, and an anti-MADD ethos that truly deserves commendation. They offer motivational interviewing, peer support, harm reduction, a real place to sleep. Face it—the majority of people who are literally passing out in the street from drunkenness aren’t doing it because it’s fun. So all jokes aside, this is beautiful work, necessary work. Imprisoning the down and out is inhumane. A victory here is a victory against mass American incarceration, which is epidemic, harmful to society, and racist.

The nation needs these—because we’re definitely never running out of drunks. Frankly, I can’t wait until the drunk tank comes to town. I think I’m gonna try to get a spot. I mean, I do live here. It’s gotta happen eventually, right? I’m gonna make the best friends I ever had.