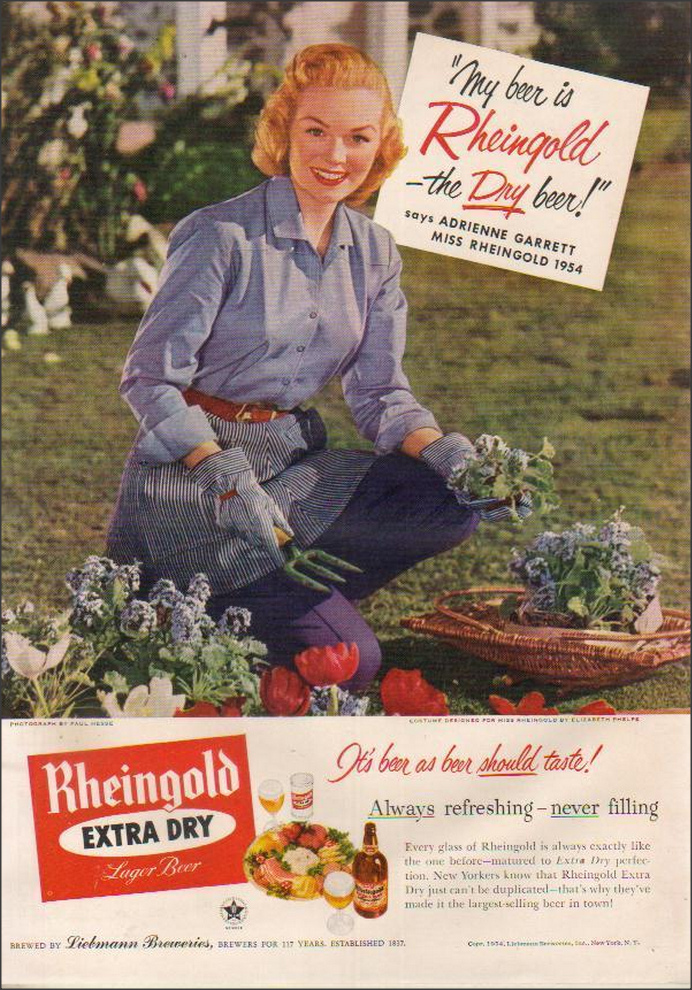 One of the most successful advertising campaigns in history was the “Miss Rheingold” contests, launched in 1940 and ended in 1965, exactly 50 years ago. That was before my time; but fortunately the story of the beloved contest is well-recorded, and soon to be told in a upcoming documentary film.

The point of the contest, of course, was to sell Rheingold beer. Brooklyn, New York-based Rheingold competed with Ballantine and Schaefer for beer dominance in New York City and the Northeast in the years after Prohibition. Rheingold trailed the field through the 1930s, not helped much by its unimaginative advertising slogan: “That’s good beer….”

Rheingold CEO Philip Liebmann had the revelation that a pretty face would help sales, so he signed up a New York actress and model named Jinx Falkenburg to be the “Rheingold Girl” of 1940. Beer sales went up. In 1941 Liebmann picked a new Rheingold Girl. The next year he hit on the idea of letting the public vote on a new “Miss Rheingold” annually, and a phenomenon was launched.

At first the candidates for each election were models hand-selected by Rheingold honchos. Later the brewery upped the excitement by allowing any young woman in America to audition, a kind of American Idol before its time. The 1942 contest drew an impressive 200,000 votes in the 6-week campaign. In 1957 the vote total was an amazing 23 million, almost as many as in the election for president the year before. But of course anyone could vote as many times as they liked. The printed ballots were dropped in bars, liquor stores, and wherever else Rheingold beer was sold.

Winners could look forward to a year of parroting Rheingold’s revamped slogan (“My beer is Rheingold… the Dry beer”) and seeing their faces plastered in newspapers, magazines, and billboards all over the Northeast. They also had a reasonable shot at making a career in show business after their reigns ended. Perhaps the most famous candidate wasn’t even a winner. Actress Nathalie “Tippi” Hedren was only a runner-up in 1954, but got noticed by Alfred Hitchcock who cast her in the lead role in “The Birds.” In 1948, 19-year-old Grace Kelly auditioned to become a candidate, but didn’t make the cut.

In 1963 the founding Liebmann family sold Rheingold to outside interests — a fatal turning point for the brand. Miss Rheingold 1964 was the last to be chosen by public vote, and in 1965 the new ownership ended the campaign altogether, supposedly because of waning public interest.

Things went downhill quickly for Rheingold from there. In 1976, a mere decade after the contests ended, Rheingold shut its doors, unable to compete with the national goliaths like Anheuser-Busch. It was a stunning fall for such a popular brand. Rheingold’s fatal mistake seems to have been complacency, a failure to think nationally, according to the book “Great American Beers,” by Bill Yenne. Content to own New York, Rheingold didn’t open any breweries across the Mississippi River until the 1960s, when it was already far too late. (Ironically, A-B would later make the same mistake on a larger scale, content to dominate the U.S. market and not thinking globally until InBev came calling.)

Tough luck for Rheingold, although by most accounts the beer was pretty average and its disappearance was no great loss. It’s the Miss Rheingold contests — and, probably, the era it embodied — that are missed more than the beer.