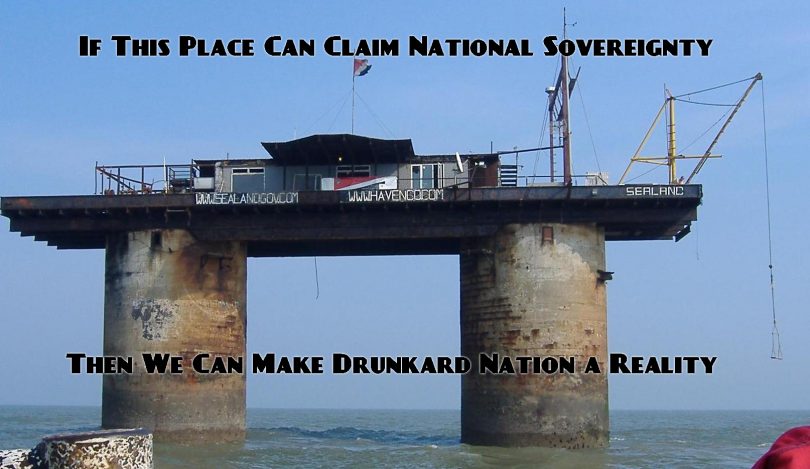 Every one of us has, at some point, thought of what life would be like if we could be in charge of our own little paradise–if we were kings or queens of our own realms. Imagine what it would be like if we could declare sovereignty over a private island and live the lives we always wanted: free of objectionable, oppressive laws; free of the rules of faceless bureaucrats handed down from on high; free to set our own rules, realize our destinies as we see fit for them to be. We all want to break free at some point, but we all face the same problem: we can’t just walk into the middle of town and say “This–all this is mine now. I rule it. No laws but mine shall govern this land.” Well, we can, but only for so long as it takes someone to call the cops, and then the additional few seconds before the taser makes contact and we meet the ground face-first. We’ve all been there.

However, there are always exceptions to the rule, and those exceptions are as rare as a post-closing-time drink on the house. Rare, but not unheard of. I present to you a golden opportunity to not only live that dream, but take up the lost vision of the great Mel Johnson and his failed utopia that was to be Boozetown (and if you need more proof that this is a missed opportunity, Listverse backs us up on this one). And I think I have a legal way to establish it as its own nation. Our nation. Drunkard Nation.

So here’s the deal: Whiskey Island is up for sale, and that presents us with a rare opportunity. You see, Whiskey Island used to be a stop-over for rumrunners and bootleggers of all stripes who were fighting the good fight to get more hooch into the then-dry-by-law-but-not-in-reality US of A during Prohibition. It was ideal: waters that were tough to navigate, clear lines of sight all around, right between Canada and the U.S.A. It was 3.1 acres of pure pro-booze opportunity, and goddamn did it take advantage. Now it along with the full lodge, guest house, and slip are up for sale.

Here’s where I get all giddy–there is precedent whereby a population with legitimate claims to a defined territory (all important terms, it seems) can claim to be an independent, sovereign nation, regardless of which “state” happens to claim it at the time. Think about it: how does any nation lay claim to its territories? The answer is three-fold: either by occupying and governing over it for an extended period of time, by conquering it through an act of war, or by accepting the will of that region’s people to be their citizens. However, what if someone just up and said “No, I live here, and I own this land. It’s mine, so I’m declaring sovereignty”? It might not work on your apartment, but it worked on a defunct British WW2 military installation that happened to be in international waters. It’s a movement called micronationalism, and it has been around for a while. Here’s how we can make it work for us.

First, we need to have a claim to the property, so it’s easiest to just buy it (since a prolonged and unprovoked military occupation is probably not going to win us much international sympathy). Then, we need to claim that we, as a united tribe of drinkers, claim it as home. This is our claim to nationhood. If there are two things I have at my disposal right now, it’s a copy of Black’s Law Dictionary and a bottle of Tennessee white whiskey (well, now it’s just a bottle with a misleading label and just a lot of regret inside), and here’s our first piece of evidence:

“The nearest we can get to a definition is to say that a nation is a group of people bound together by common history, common sentiment and traditions, and, usually. . . by common heritage. A state, on the other hand, is a society of men united under one government. These two forms of society are not necessarily coincident. A single nation may be divided into several states, and conversely a single state may comprise several nations or parts of nations.” John Salmond, Jurisprudence 136 (Glanville L. Williams ed., 10th ed. 1947)

By legally acceptable definitions, we are a nation by virtue of our shared history (the history of drink is as old as civilization), our common sentiment (that booze is a sacred right on offer to all free men and women), traditions (we have toasts! and classic cocktails! and a long history of the rules of boozing!), and a common heritage (which is probably somewhere in the last few items, so there). But there is a hurdle. Thankfully, I run much better when I’m pissed, so this hurdle should be a cinch.

Once we get this island (to which we, more than anyone else, have the right, given its heritage), we have to declare independence. International law seems to have two opinions on the matter: either sovereignty is recognized by a declaratory or a constitutive view. The declaratory view seems to hold that a group of united peoples with a solid claim can declare themselves a nation, whereas the constitutive view holds that other nations have to recognize it as sovereign for it to be so. As that linked essay suggests, there is some debate on which view holds the utmost sway in the realm of international law. The UN, however, makes it pretty clear: if you want to petition for membership, you have to apply, and our application would be subject to approval by other member nations. However, if we accept their charter and are willing to open diplomatic relations (and seriously, who is more diplomatic than an outnumbered drunkard?), we might just have a shot. Here’s their wording:

We don’t want to harm anybody. We’re all about good cheer. We’re about sharing a drink and just feeling good together. Hell, Iran and Russia are members, and how well can they stand up to our claims of peace and solidarity among all peoples? Russia is even a permanent member of the Security Council (which means they hold veto power over new applicants), and they have to see the wisdom in letting drinkers unite. They nationalized their entire booze industry a few times just because of that fact. We’re a powerful tribe.

In the end, I want us all to consider how great it would be to realize that lost dream of Boozetown, to finally raise a flag over a tiny patch of land and say “Yes, let us raise not only a flag today–let us raise both a hearty glass and a torch of freedom to a brave new tomorrow where we all might sit down for a drink, share our fears and hopes and dreams and off-color jokes, and recognize our shared humanity. Let us lead the way to a better, blurrier tomorrow. A tomorrow where we have to call in sick to work, but a tomorrow nonetheless.”

If I can figure out how Kickstarter works, I’ll launch a campaign. If anyone feels like lending video expertise to this grand endeavor, please get in touch.

The future of humanity may very well rest in the balance.