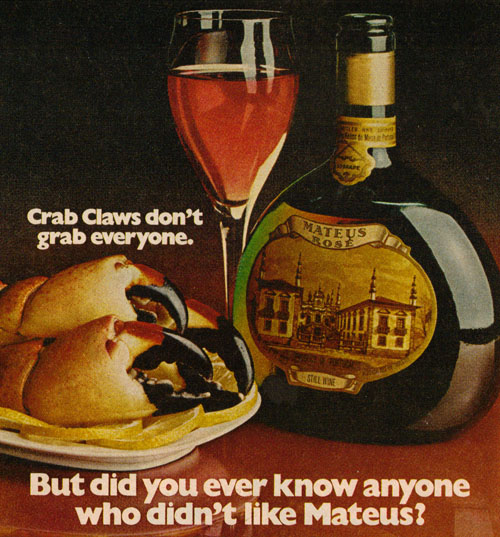 Andre the Giant downed 6 bottles of it before a match. Saddam Hussein imported 2,400 cases of it a year, and was reportedly clutching a bottle when GIs finally plucked him out of his spider-hole. Elton John name-dropped it in his song Social Disease: “I get juiced on Mateus and just hang loose.”

Mateus likes to bill itself as “The Original” sparkling rosè wine. Sweet and fizzy, Mateus is a product of Portugal that first appeared in 1942. Portugal, of course, is famous for port; but in WWII not much port was getting around, resulting in a glut of grapes. Founder Fernando van Zeller Guedes had the inspiration to turn the surplus into cheap wine. He deliberately bottled Mateus in funky, oval-shaped bottles that could double as candle-holders, and were unlike any wine packaging seen before.

Mateus turned into a solid seller after the war, even picking up an international following thanks in part to returning GIs who acquired a taste for wine while overseas. It gained legions of loyal, sometimes famous, fans. Queen Elizabeth is (or was) reportedly a devoted Mateus drinker, ordering it when she dined out at the Savoy Hotel. In the 1960s, Jimi Hendrix gave Mateus an invaluable boost when he was photographed swigging it straight out of the bottle.

In the 70s Mateus became a certified hit, competing with the likes of Blue Nun and Riunite for international wine supremacy. In its heyday it was moving 3 million cases a year, and TV ads dubiously billed the experience of drinking Mateus as “like a trip to Portugal.”

Eventually Mateus (and Blue Nun and Riunite) fell out of favor into obscurity, victims of their own success. Wine drinkers weaned on the cheap sweet stuff moved on to more complex styles. In Mateus’s case, the arrival of white zin gave Americans a home-grown alternative that was just as sweet and easy to drink.

In 2016, Mateus is still hanging on. It claims to be in 19th place among European wine brands — not much to brag about, really, but at least it’s doing better than old rival Blue Nun. It got a makeover last year: the dark green bottle was replaced with a clear one, the better to show of its bright color (the iconic oval shape of the bottle is unchanged). The juice has also been toned down, not as bubbly and sweet as it used to be, yet still packing the same (13% ABV) punch. At almost 75 years old, Mateus doesn’t get around like it used to, but it doesn’t look like it’s ready to die just yet.