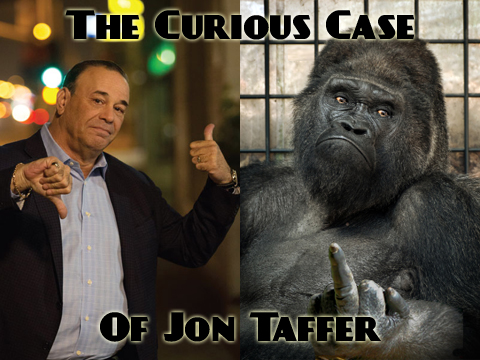 We are coming up on the annual Nightclub and Bar Trade Show and Convention in Las Vegas, and once again it will be hosted by shaved-ape and famed nightclub consultant Jon Taffer (pictured above, I believe twice). You most likely know him as the host of the contentious TV show Bar Rescue (which our Captain of the Good Ship Drunkard has mused over previously). If you are not familiar, the premise is simple: Jon Taffer visits bars that are about to go out of business, nearly gives himself a stroke from screaming at everyone and everything human-shaped in the place, decides that what every customer really wants is either an epilepsy-inducing nightclub or a kitschy steam-punk themed cocktail bar for 20-somethings, then he yells some more, and finally he gets some crew of what have to be talented drifters amped up on homemade speed to completely renovate the place overnight, permits be damned. Missing-link Taffer claims that his “bar science” will fix the struggling business’s problems and everyone learns a valuable lesson about either teamwork or cowering before a belligerent he-beast in an off-the-rack suit jacket. All I’m saying here is that he behaves in an uncivilized, apish manner. Just making sure you’re with me on this one.

Granted, the veneer of “reality” that gets shellacked onto the tragicomic farces of Jon’s vaguely scientific overhauls of failing bars is as transparent as an unaged whiskey. Lawsuits have been filed against Mr. Taffer and the show’s production company alleging exactly that. To make matters worse, a significant percentage of the “rescued” bars go on to close only a few months after the crews wrap up filming. In all fairness to ChimpManzee Taffer, some places are run by such muppets that no amount of re-branding or strobe lights or butt funnels (seriously, that’s a thing Taffer thinks we want) can save them. There is only so much he can do without staying to run a place indefinitely, so some failures are bound to be solely on the microcephalic domes of the useless owners.

And while we’re talking about butt funnels, that kind of close social genital rubbing is something that other primate species regularly do in the wild. So, the shaved-ape evidence is mounting. Taffer has his science, and I have mine. And mine is actual science. Kind of.

For all of his faults (like berating some male owners for being sexist, but he apparently has given away breast augmentation surgeries to female patrons in the past and then hung “before and after” bras in the men’s bathroom, and then they were judged), I want to like him in some small way. Actually, I can’t let that breast augmentation thing go. Here’s an excerpt from a Reddit thread he participated in about a year ago: